Amsterdam’s bike infrastructure is again in the news, this time for the €60 million underwater bike parking garage.

Underwater sounds really cool, in the tradition of James Bond and Dutch canals, but let’s look a bit deeper into the why and how much, with foci on public spaces and opportunity costs, respectively.

The garage is next to the city’s Station Centraal, which has had an excess of parked bikes for decades. The mess is because parking is free and lightly regulated. Indeed, it’s a classic case of a tragedy of the commons, i.e., too many bikes for too few spaces. The city has added racks, double deckers, floating parking, etc., but “more (free) supply” does not reduce demand from wrecks, stored bikes — and many many commuters.

NB: Paid (€1/ day) parking under the tracks is available with no wait.

The new garage might change this situation by providing  the parking commons into a club good.*

So, a club good because riders need to “check in” when they use the new garage. This means that people can be excluded “from the club.” This system will probably also be popular because the first 24 hours are free; additional time will cost something per day.

Some people are complaining about “privatizing the commons” with this garage, and they’re right, but it’s not like anything else has worked in the past 70 years!

Besides that change, it seems possible* that there will be fewer bikes stored around centraal, which will free a lot of space for other uses. Are there 200 stored bikes? 2,000? We’ll find out.

Now, to opportunity cost. I am sure that the engineers had a great time building another underwater garage, but how much does that €60 million represent?

Well, it’s €3 per Dutch citizen or €8600 per parking place. That’s cheap compared to the €50-100,000 per parking place for the two underwater car garages that I described in my paper on (car) parking in Amsterdam, but that’s faint praise — to be cheaper than a boondoggle subsidizing those rich enough to have a car in Amsterdam.

What else could you do with €60 million? Given that around half of Dutch students do not ride bicycles to school — either because they do not have them or are driven or lack training — it would make sense to subsidize lessons (even more) and bikes for kids. That would work out to around €300 per child in Amsterdam, or enough for a  bike (and lock!) and training.

And then there are the car parking garages near Centraal. Oosterdok, for example, has 1,700 spaces. Assuming 6 bikes per car space and then allowing for double decking, that’s enough space for over 20,000 bikes! But let’s be reasonable and only convert 600 car spaces to fit 7,000 bikes. Will the cars be able to fit into 1,100 remaining spaces. Probably, given that the garage advertises €10 per day parking!

My one-handed conclusion is that the city built an expensive club good rather than fix its commons. That was easier for the bureaucrats, but it left a bunch of kids without wheels and an excess of cheap car parking that ruins the city for pedestrians and cyclists.

* I say “might” because it’s not yet clear that the city will remove 7,000 street spaces and push bikes to the underwater garage, but that would make a lot of sense. 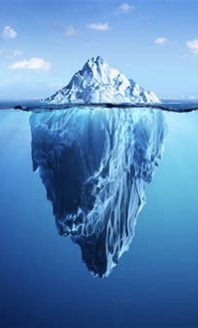 How do you describe yourself to others?

I am a white American 53-year old male, of average height and weight, mostly white hair (a touch of pepper), green-blue eyes, and a decent tan.

I’ve eaten out of dumpsters (for 2 years), gone from fundamentalist Christian to agnostic, spoken bits and pieces of six languages, traveled in many places, dated many women (and married one), gone from wanting five kids to zero, gone from anorexic (114 pounds/52 kg) to normal weight as a vegan, gone from vintage British convertibles to two bikes and two boats, earned a PhD but failed to play any musical instruments.

So do you know me now?

We — all of us — contain multitudes. Don’t judge or assume from the surface. Explore and appreciate what’s underneath.

I had heard of Douglass, but man oh man, I had no idea of his brilliance.

His “Composite Nation” speech is full of wisdom and hope, offering a path to that “shining city on a hill” that Americans have had such a hard time reaching — mostly due to a desire to preserve “tradition” over “progress.”

(Listen to this Malcolm Gladwell episode on a segregationist in the 1970s — a man who has many imitators, led by T***p, in today’s America.)

Here are some excerpts that deserve your attention:

NB: Most racists insist that Whites are biologically better than Blacks; some even asserted that Whites and Blacks evolved as separate species that could not mate! Listen to Scene on Radio’s “Being White” podcast series to understand the origin of racism (Portuguese slavers needed an excuse to justify their infernal trade).

Douglass goes on to address the “Yellow Peril” that was (infamously) battled with exclusionary laws that were enacted in 1862, strengthened in 1882 and not fully repealed until 1965:

My one-handed conclusion is that all men (and women) were created equal, but they were not — and in many cases — are not treated equally in the US. That’s a pity for our country, a hypocrisy for our reputation, and a reality that needs far deeper discussion, soul-searching, and reflection.

Do unto others as you would have them do unto you?

I was born an American and gained British citizenship (through my father) in my 20s. These two passports have allowed me to travel, live and work (until Brexit) in 20+ countries — all of them in the richest quartile of countries in the world.

People in the other three-quarters of the world’s countries have had fewer options in travel, but — more importantly — individual flourishing and collective development.

Some Americans face more barriers than I did, as a middle-class “White” kid growing up in California — don’t get me wrong — but even they have advantages over the middle and upper classes in so many countries.

The first difference would be entering an entirely different legal, political, economic and cultural sphere. Ignoring the obvious (language), the culture shock would be extreme. Americans understand more about their socio-economic ”diversity” than outsiders, just as Indians, Thai’s, et al. understand theirs. It’s not about “knowing YOUR place” but “knowing THE place”. It’s not an accident that so few people (3 percent, on average) migrate within the EU. Even in the US, the rate of internal migration has been falling since 1980. Moving from your family, friends, geography and climate is stressful, which is why it’s so rare.

The second difference would be the step-change of (statistically) moving from average income of, say, $30,000 to $3,000 or $300. Such orders-of-magnitude moves would force one (for better or worse) to recalibrate all manner of choices, habits and plans.

Third, and perhaps most daunting, would be the expectations of those around you — again, for better or worse. A White South African doctor told me “You can’t beat Cape Town for quality of life… but there’s always that risk that you or your family will be violently assaulted.” (He wasn’t the first to say something along those lines.) That’s quite a paradox to incorporate into “quality of life”

For non-White South Africans (race is a social construct everywhere, and I don’t really understand it in SA), the situation is not much different in terms of downside (rape, assault, theft and murder), but potential risks and upsides are not uniform.

Most people on the planet do not think if they are born (un)lucky, since most do not travel, and those who do can easily avoid thinking about these issues — if anything, social media means that most of them are exaggerated caricatures — but they exist.

My one-handed conclusion is that 90 percent of our success or failure depends not on our hard work or laziness, good luck or bad, but on where we’re born.

H/Ts to YK and AC

I’m not shy about criticizing the weakest elements of economics (there are many), so it’s sometimes a good idea to remind myself (and you!) of the strengths of economics, i.e., those characteristics that make it useful.

Here’s an example based on a test-question I just asked:

You are a baker facing higher energy (natural gas) prices. Higher prices result from (choose one for each): (i) A change in demand or quantity demanded? (ii) A change in supply or quantity supplied? (iii) Which impact came first?

The start of the right answer lies in the question (“higher natural gas prices”), which result from Russia’s (recent) invasion of Ukraine, i.e., impacts from closing and damaged pipelines, embargos,  etc.).  So the answer to (iii) is that the supply shock came first.

Now what about quantity supplied vs supply of natural gas? The first refers (in economic jargon) to changes in price or quantity within a supply/demand figure “holding all else equal.” Since the figure only shows the price/quantity relationship, other changes do not move up/down the line; they shift the line entirely. What’s assumed is that the line represents “supply in the market” (a mix of technologies, firms, geographies) and how, typically, you can get more quantity by offering a higher price (thus, the rise from left to right). In the case of the war, a few things (firms, geographies) are NOT being held constant. Indeed, the supply curve shifted in due to a loss of some/all Russian NG supply. That’s called a “change in supply” from S0 (baseline, in black) to SW (war, in red) 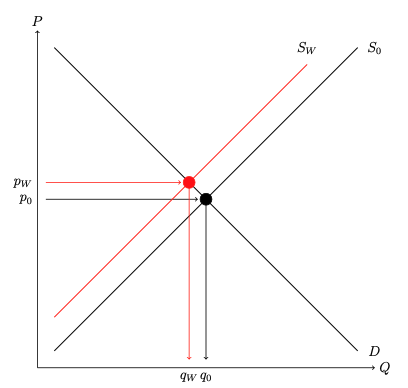 What about demand? Its components (income, tastes, substitutes) were still “equal” when supply shifted in, so it doesn’t shift. Instead, prices rise (to PW) and quantity demanded falls (to QW, “climbing up the demand curve”) as supply shifts from S0 to SW. (Note that prices often lead to quantities, hence the arrows.)

This model separates causes and effects, which helps with planning, reactions, and so on. There are, of course, many responses that have affected (shifted) both supply and demand, but those came after the initial shock.

My one-handed conclusion is that it’s useful to have a logical means of understanding/explaining the everyday complexities of markets.