I’m on vacation in Italy, so this short post will also give you a break 😉

Here’s a really short episode of Jive Talking if you want to think a little about saving (or gaining) time.

My one-handed opinion is that most of us have a lot more time than we think — it’s just hard to say no to all the things that take it from us. 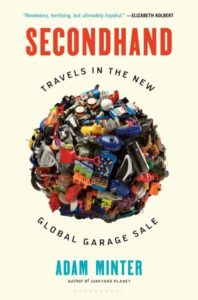 I read this 2019 book at record speed due to its breezy (“magazine”) tone and discussion of one of my favorite passions: reusing old stuff.

A few years ago Adam Minter wrote Junkyard Planet about the trash trade, but many readers told him about how they reused stuff rather than about their trash. Their passion led to this book (subtitle: Travels in the New Global Garage Sale) on the second-hand goods that are exported by businesses and non-profits in the US and Japan, via processors in India, to various Asian and African countries.

Perhaps the most important fact I learned is how little we know about the secondhand-world. Data is missing due to the “used” nature of the goods, their missing objective value (“one mans trash is another man’s treasure”), and the informal trade of “worthless” things among some very poor people.

That’s the summary. Now I will list my notes and highlights to summarize what I learned and why you might want to read it.

I enjoyed this book immensely for its confirmation of what I knew, its corrections of what I misunderstood, and its strong support for less consumption, quality repairable goods, and a vibrant market in used goods. I recommend that you read it but more strongly recommend that you examine your own consumption:waste ratio before buying anything this holiday season 😉

Many economies around the world continue to grow or bumble along without much sign of crisis. (This article describes how such a “trend” might be enduring, using the example of a Japan whose aging and shrinking population is consuming and investing less.)

Without economic issues in the headlines, politicians are looking for ways to differentiate themselves and “get things moving.” This impulse worries me, as politicians are far less predictable than markets or economies.

Thus, I think that our next economic crisis will result directly from political mistakes rather than indirectly result from political regulatory failures.

Trump is already playing this game, pulling the market here and there with new larger forgotten back-again tariffs. His democratic opponents, many of them proposing radical change (e.g., wholesale reform of a “health industry” that absorbs 18 percent of GDP) have led some hedge funds to bet on big market losses after the Super Tuesday primaries, when Warren might perhaps win a lot of delegates.

Meanwhile in the UK, Corbyn and the Labour Party have proposed a strong return to state intervention, which could also have dramatic consequences.

Let me point out that I am not opposed to different political platforms or (often much needed) reforms. Nor am I a fan of Trump’s policy of destroying government from the inside and leaving the ruins to corporate cronies. Rather, I am worried that politicians are starting to forget the benefits of a strong diversified economy by taking existing economic stability for granted.

My one-handed conclusion is that politicians are at their most dangerous when they think they can implement radical policies without consequences.

Donald Trump is not just bankrupt as a moral leader coward. He’s also wildly corrupt, in terms of enriching himself at a vast cost to the country. (By vast, I mean that he’s willing to give up $billions of US wealth to get himself $thousands in golf courses or deals for his daughter.)

Republicans have allowed for this behavior because it ain’t their money and voters seem to think Don and the Replicants are on their side. That’s crazy wrong. (Just tonight I had to clarify how little of Obama’s economic growth Donnie can claim as his own. I’d say negative, given his attacks on trade, migration and American alliances.)

Anyway, the Replicants are selfish cowards who care nothing about the Constitution (let alone God), but business people are not in the same class. They will act because their money is at risk. For example:

The Economist: “Amazon confirmed that it will appeal against the Pentagon’s decision to award a $10bn cloud-computing contract to Microsoft. Amazon had been favourite to win the contract, before Donald Trump, who has kept up a public feud with Jeff Bezos, the company’s boss, suggested it should go elsewhere. Amazon says that procurements should be administered “objectively” and “free from political influence”. Mark Esper, the defence secretary, said the process had been fair.”

My one-handed conclusion is that Trump is toast as soon as he starts to cost people real money. Let’s see if he can avoid tanking the economy (or powerful businesses) before the election. (I think he should be impeached, of course, but that won’t happen while Replicants are insulated from voter anger.)