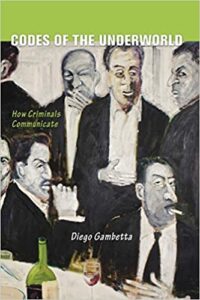 I met Diego Gambetta back in 2005 when I was a student at a summer school on organized crime. I am still interested in crime and corruption, so I bought this 2009 book awhile back.

So what are criminal codes, and how do they work? At their best, they allow communicating and signalling in a way that non-criminals do not notice, wanna-be criminals cannot counterfeit, and real criminals can understand easily and accurately.

Good codes might be a tattoo that indicate what gang you’re in, a nickname that friends can use but the law cannot, or sexual slang that sounds like a grocery list. In many cases, codes are associated with criminals or terrorists, but they are also used by forbidden groups (gays, prostitutes, activists) whose existence is illegal or forbidden.

Gambetta is a smooth, fluid writer. His elaborate prose sometimes seems too measured for the topics, but his citations, caveats, and hypotheses provided enjoyable, cautious perspectives on the forms behind the shadows.

Chapters are organized into two parts: Costly Signals (e.g., putting yourself at risk to gain trust, fighting for respect, or self-harming to empower) and Conventional Signals (“Fat Tony”, [the organization that shall not be named], and messy dressing).

Here are some notes I made as I read…

My one-handed conclusion is that this book is a fun read for anyone who wants to think about communication — or start a gang. Five Stars.

§1. Marshall promises to look into labor, its division and relation to capital and management over several chapters. He begins by supporting “practice makes perfect,” i.e., that:

The mind of the merchant, the lawyer, the physician, and the man of science, becomes gradually equipped with a store of knowledge and a faculty of intuition, which can be obtained in no other way than by the continual application of the best efforts of a powerful thinker for many years together to one more or less narrow class of questions.

While I agree with this formulation, I call attention to the use of “intuition,” which most people define as something you’re born with, but Marshall defines as something acquired. Websters defines it as:

1a: the power or faculty of attaining to direct knowledge or cognition without evident rational thought and inference
2: quick and ready insight

…so Marshall (and many academics) misuse the word, to the detriment of students who seem to “lack intuition” towards non-obvious ideas — a topic I’ve written about [pdf].

§2. The division of labor allows a worker to become more productive, but an efficient worker’s methods of breaking down tasks into simple, repeated steps makes it easier to replace that skilled worker with a machine or “guided” unskilled worker.

§3. Workers are not replaced by machines due to the division of labor as much as the need to produce large volumes of identical parts at scale. It is thus the size of the market that drives mechanization. Put differently, a business will pay fixed costs (FC) if that’s less than the cost savings (Δc) times volume (q), i.e., FC ≤ Δcq.

§4. Since machines are good at producing identical parts, they allow for interchangeable parts, which aid in repairs (no special modifications needed), lower costs, and make remaining workers (with better general skills) more productive. 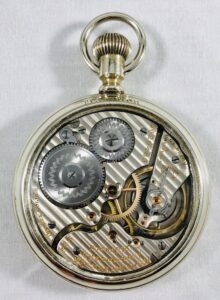 Marshall gives the example of American watch-manufacturers using standard parts as a means of taking market share from the Swiss watchmakers selling more expensive, less-reliable watches. That’s one reason I was happy to buy this 1921 Hamilton:

§5. Marshall turns to printing, which has also gone through several technological revolutions (from hand-cut plates, to hand-placed letters, to hot-lead type, to digital layouts). These steps, he emphasizes, can be broken into smaller and more specialized niches (somewhat weakening the power of craft), but their output facilitates new trades requiring more skills (journalist, photographer, artist, et al).

§6. Marshall pushes back against claims that automation has left workers with nothing to think about, without craft. Instead, he emphasizes how a woman can run four weaving machines to produce far more cloth than she could make after a day’s drudgery at the hand-loom. The children of poor farmers, likewise, can earn more and use more education, than they could growing potatoes. Also interesting is his point on how machine labor saves a man’s muscles, so he can relax rather than collapse at the end of a working day. (The traditional critique of the Agricultural and Industrial Revolutions is that they resulted in more work — and less satisfaction? — than hunter-gatherer lifestyles, but those lifestyles are neither possible for nearly 8 billion people, nor attractive to most.)

§1. Industrial organization (I/O) is the branch of economics concerned with the internal workings of organizations (e.g., Coase’s 1937 Theory of the Firm) as well as their interactions in (non-)market settings.

Marshall’s discuss predates these ideas. He begins with a discussion of how individual specialization (based on the division of labor popularized by Adam Smith) requires group cooperation. Marshall asserts that such inter-personal cooperation is the key to evolutionary success, a point elaborated in authoritative detail in Joseph Heinrich’s 2015 Secret of Our Success [my review]. Marshall cautions that success is not based on “build it, and they will come” skills but a market demand for one’s skills. 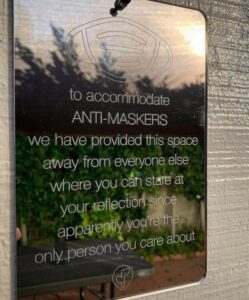 He also points out (foreshadowing Heinrich) that “those races, whose members render services to one another without exacting direct recompense are not only the most likely to flourish for the time, but most likely to rear a large number of descendants who inherit their beneficial habits” [p 202]. This characteristic is quite important in this corona-era if you want to understand the differences between public health successes and failures (see image).

A side note on sustainability, a concept that grew popular after WWII but whose roots date back to Malthus (1798) but whose implications grew more prominent during the Industrial Revolution:

§2. Marshall elaborates on the the benefits of group loyalty:

[De]liberate, and therefore moral, self-sacrifice soon makes its appearance; it is fostered by the far-seeing guidance of prophets and priests and legislators, and is inculcated by parable and legend… [T]ribal affection, starting from a level hardly higher than that which prevails in a pack of wolves or a horde of banditti, gradually grows into a noble patriotism; and religious ideals are raised and purified. The races in which these qualities are the most highly developed are sure, other things being equal, to be stronger than others in war and in contests with famine and disease; and ultimately to prevail. Thus the struggle for existence causes in the long run those races of men to survive in which the individual is most willing to sacrifice himself for the benefit of those around him; and which are consequently the best adapted collectively to make use of their environment.

…before commenting on “parasitical races”:

For, though biology and social science alike show that parasites sometimes benefit in unexpected ways the race on which they thrive; yet in many cases they turn the peculiarities of that race to good account for their own purposes without giving any good return. The fact that there is an economic demand for the services of Jewish and Armenian money-dealers in Eastern Europe and Asia, or for Chinese labour in California, is not by itself a proof, nor even a very strong ground for believing, that such arrangements tend to raise the quality of human life as a whole

Marshall’s perspective here is not just racist; it contradicts the basic economics of gains from trade. Money lenders play an important role. Jews and Armenians did not take that role out of parasitical desires or genetics, but due to legal restrictions that prohibited them from other work while leaving money lending open to “infidels.” The case with Chinese — who were banned from entering the US by the 1882 Chinese Exclusion Act (only fully cancelled in 1965) — is likewise racist. The Chinese were not parasites but willing laborers hired by willing employers. For anyone following the nativist rants of Trump, Brexiteers (and other chauvinistic populists), Marshall’s attitude will be sickeningly familiar.

§3. Marshall speaks of the natural benefits to caste and class systems (systems the British reinforced and exploited, via “divide and conquor”, in colonial India), and how those systems have been swept aside by the social, political and economic mobilities that have taken over industrial nations. He then reflects (and worries) that these freedoms risk being lost by the rise of “new caste systems” represented by division of labor.

§4. Marshall laments those who ignore Smith’s caveats on the division of labor (satirized by Charlie Chaplin’s 1936 “Modern Times”) in their insistence that more division is always better.

§5. Marshall states that species are will flourish if their members possess instincts useful to the individual and group, but he does not assume that’s the same case with humans, who have more discretion — to drink excessively, for instance. With a quick dismissal of the potential for children to inherit their parents learned skills (Mendel’s work had recently been rediscovered; Lysenko’s errors were yet to come), Marshall makes an easier claim: that the children of healthy, well-adjusted parents were likely to grow up healthy and well-adjusted.

Marshall ends the chapter with a plea for slow, thoughtful and persistent advances to improve Mankind, with a special emphasis on rescuing the “lower grades” to improve their lot and on improving the distribution of wealth. How would he drive this process?

Progress may be hastened by thought and work; by the application of the principles of Eugenics to the replenishment of the race from its higher rather than its lower strains, and by the appropriate education of the faculties of either sex [p 207].

Eugenics again. Read the wikipedia article for more on its long history (from Plato to Lee Kwan Yew), but I agree with its opponents: Any eugenic program is likely to be abused (e.g., forced sterilizations in Australia, Canada, the US, et al.), and eugenics are far too slow and ineffective compared to improved public health and education.

When I think about the supporters of Trump, Hitler or other sociopaths, I don’t think “what we need here is some genetic winnowing.” What I think is that we need a population better educated on cause and effect and institutions for resolving conflict with something other than hate and violence.  One can hope.

As any frequent user of WhatsApp or a closed Facebook group will recognise, the moral anxiety associated with groups is rather different. If the worry in an open network is of being judged by some outside observer, be it one’s boss or an extended family member, in a closed group it is of saying something that goes against the codes that anchor the group’s identity. Groups can rapidly become dominated by a certain tone or worldview that is uncomfortable to challenge and nigh-impossible to dislodge. WhatsApp is a machine for generating feelings of faux pas, as comments linger in a group’s feed, waiting for a response.