The Netherlands had three “named storms” last week: Dudley, Eunice and Franklin. These are storms with 100+ km/h wind speeds, and they can do lots of damage: blowing down trees, pushing cargo boats off their moorings, disrupting flights, etc.

For me, they were inconvenient because I could get the train to work. Luckily (?), COVID has made everyone familiar with zoom, so we met online, but the interruption reminded me of what I wrote in 2016:

Colder winters and stronger storms will force humans, activities and infrastructure into unfamiliar territory. Impacts will be felt at all levels and sectors of society as “weird weather” disrupts agriculture, tests heating and power infrastructure, stresses ecosystems, and forces people to revisit habits of work and life…
[snip]
People will cope in different ways. Virtual business meetings will become more common, family reunions less frequent… Innovations in technology and best practices will reduce or perhaps even overcome these losses, but “perfect storms” of bad conditions will surprise and kill us.

The good news is that technology has indeed helped with recent weather interruptions. The bad news is that some cannot switch to technology and that the damages of storms may outpace the solutions of technology.

But think ahead. What if there’s “no point” of going to work, either for logistical or cultural reasons. Will people sit at home, staring at screens all day? Will they earn enough from where-ever their work is to pay the costs of where-ever they live? Will someone with more talent and lower costs take their job? Will they even want to work without the human contact we’re chemically and socially evolved to seek and enjoy?

I don’t want to live in the matrix, and I have the luxury of choosing to work, but I don’t think that’s true for 80% of the world’s white collar workers. What about those who do physical, location-based work? Maybe they will be busier coping with bad weather, maybe they will be replaced by robots.

My one-handed conclusion is that climate chaos, by limiting our transport options, is going to limit our range of choices, travel, work and life. 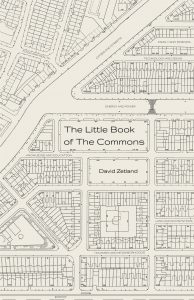 After 14 months of off-and-on writing, The Little Book of The Commons is available for you to read! You can buy the paperback or get the free digital version (why I give my books away).

From the back cover: The Commons are as widely misunderstood and overlooked as they are widespread and critical in sustaining and enriching our lives. They come from nature, but humans can also create them. They are open for all to enjoy but often suffer from abuse and neglect. This book explains how we’ve come to understand the formation, function and failure of the commons and uses examples to show how the commons touch our lives in so many ways.

Curious about my “writing progress”? Here you go! 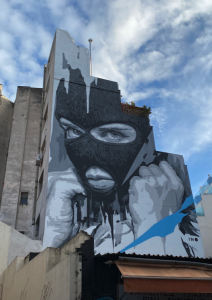 I last visited Greece (Corfu, Athens, Samos) in 1991, so my return there in January was an opportunity to “reset” my impressions (hot, dirty, not as nice as Turkey).

First of all, it wasn’t that hot, but this was in January 🙂

Second, I found the people we met (casually but also in longer discussions) to be really nice (even kind) relative to other Mediterranean cultures.

Third, I am pretty sure that Athens about as clean/nice as Istanbul 😉

But here are a few more impressions, based on Leiden University College’s six majors. 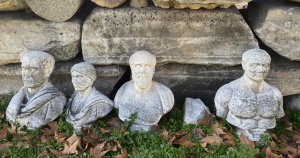 Culture, history and society: Greece has a long and well-documented history. Its influence on Rome, and thus Europe, was profound, even if it was often mythologized. As a society, the Greeks are more traditional (conservative) than northern Europeans. The culture is a lot more relaxed, but that attitude can also be annoying. My favorite phrase on the trip (learned from a Greek) was “in theory…”, which should be offered near any statement regarding timing, opening of shops, office or museums, pricing, etc. Oh, and the British should give back the bloody Elgin Marbles. It’s a crime against the Greek people.

Global public health: The population is relatively poor, but there are government and NGO-efforts to keep people safe(r) from Covid. Public bathrooms were not common, street markets were cleaned up quickly after close, there were very few stray dogs (but many cats). The lifestyle is lower stress, but poverty can end it prematurely. 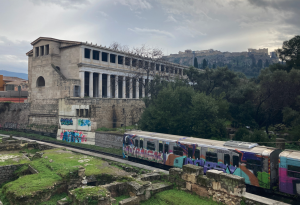 Governance, economics and development: Corruption is widely-acknowledged but change is unlikely (dynastic politicians). Much development is/will happen if/when the post-financial crisis diaspora returns. The cost of living is very high relative to wages (Greek PPP-GDP/capita is half the Dutch level). Foreigners/tourists can bring money but exacerbate corruption. Government treatment of “anarchists” in Athens is appalling.

International justice: The Greeks are on the front-line of tensions with (authoritarian) Turkey and (shitshow) Syria. The EU should have done a lot more to fund the Greek/EU border control. I doubt TR will attack GR, but Cyprus is always a sore-spot. It would be better if Cyprus would reunite, but — as we saw in Lebanon and Bosnia — it cannot be run by sectarian factions.

Sustainability: The people are too poor and few (10 million) to worry much about sustainability. They are experiencing record heat and wildfires (made worse by cutting fire fighting budgets and spending on weapons). The prices for meat are lower than for fish or cheese (!), which is good for tradition/protein but bad for sustainability.

World politics: Greece was abused by DE and FR after the financial crisis, as those governments wanted their banks to get repaid. As a result, IMO, the Greeks have turned to China, which will not end well (my recent post). Greece’s importance (see “justice” above) will only grow as forced migrations increase with climate and political instability.

My one-handed conclusion is that Greece is a lovely country full of nice people who are mis-led by corrupt politicians who make them poorer and abused by foreigners who have forgotten how heavy is the burden of poverty.

H/Ts to AB and MM

I just spent a few weeks in Greece, on holiday. Greece has been through a lot of stress since the 2008+ financial crisis (I think the country should have declared bankruptcy), but now it has a “friend”: China.

China is investing in Greece’s largest port, exporting plenty of goods to Greece, and also building “soft” ties like these ==> 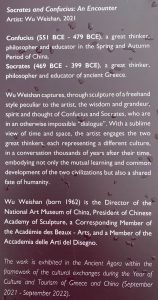 The accompanying text (left) is a bit cringe (click to enlarge), but it is typical for Chinese diplomacy: allowing for some overlap between China’s greatness and that of the supplicant country. (There was also an American-sponsored plaque at this location. It was all about how the Americans were proud to pay for restoring Greek history, under the direction of Greeks. No USA! USA! I miss the old days…)

So my story here is simple: China, as Greece’s new “friend,” is not such a good friend.

It goes like this: Greece is that girl in school who has not taken good care of herself. Yes, she’s a bit obese, but she’s facing issues beyond her control as best she can. Sadly, the cool kids — France and Germany — are not that interested in obese Greece (they even tease her!), so Greece is a bit depressed. But China is there! China says nice things to Greece, helps her with her ports and economy. China is a real friend. Why not date?

So then Greece ends up pregnant, and China is busy. “But China — we were friends and now I’m pregnant — can’t you help me?”

After some silence, China reacts: “Sure you can have my kid, but I’m not gonna support you, and neither will anyone else, since it’s my kid. I’ll call you later… maybe.”

The story, in other words, is that Greece — like many countries participating in China’s “Belt and Road initiative” — is getting fucked (watch this), and it’s not going to turn out well.

My one-handed conclusion is that China’s “friendship” is worse than isolation and poverty.

* Why do so many countries accept it? China is totally fine about bribing rulers who don’t care about their citizens and then leaving those citizens with debts even heavier than the French or Germans might assess.