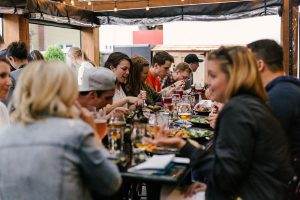 Theory: Brussels — as the workplace of many “EU professionals” — has a large population of people from all over the EU (diversity and away from home), most of them fluent in English (good for mixing), and all of them working in a social/bureaucratic atmosphere (personal relations and “mixers”) are common. This seems quite the formula for an active dating scene in comparison to, say, Berlin or Barcelona (cities dominated by the “youth” dating scenes).

Data: I don’t have any. Do you? (Even anec-data are welcome 🙂

My one-handed assertion is that “nature will find a way” 🙂

We hear a lot of “we need to prevent climate chaos [CC] to save humanity,” but that cliché is just wrong.

In combination, I predict that our world of 2100 or 2200 will be much more dangerous (due to CC) than today but inhabited by a smaller population of humans who have found ways to cope with harsh conditions and a falling standard of living. (We will need to pay for man-made alternatives as today’s “free” ecosystem services weaken/collapse/reverse.)

Beginning around then and strengthening as history unfolds and humans are beaten back, I predict that some ecosystems (and their services) will come back as people are forced to retreat. In some ways, there may be a flowering of diversity in this “new Eden” but it may not be so friendly to our descendants.

My one-handed conclusion is that humans will always be on Earth, even if they are less dominant.

* There’s the possibility of a catastrophic, “Don’t Look Up” event, but I’m not sure that even that would eliminate ALL humans.

Politics concerns itself with rights to choose, refuse or oblige. Rights imply the ability to force others into action (or prevent them from acting), which translates into non-voluntary (compulsory), zero-sum transfers of wealth (or its equivalent) from those with less power to those with more power.