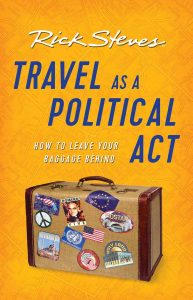 Rick Steves is perhaps the most famous American giving advice on traveling abroad. I have never used his guidebooks (thinking that they were perhaps too generic for my “advanced” backpacking skills), but I just bought one for Italy.

This book (subtitle: “How to leave your baggage behind”) is not a guide for tourists but a guide for understanding other countries and cultures. What I especially enjoyed was how Steves clearly explains foreign ideas in terms familiar to Americans. I would have loved to have this book as a response to the many people who have asked why I travel and what I’ve learned.

This book very easy to read, so it’s also a good one to take on vacation. (These data are a few years old but they show that 40 percent of Americans took zero vacation years in the prior year while only 12 percent vacationed outside the US.)

But let’s get to some interesting parts of the book: