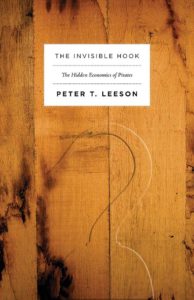 I read Peter Leeson’s The Invisible Hook: The Hidden Economics of Pirates a few months ago, but now I have time to write out some thoughts on his entertaining and educational book.

Leeson is a professor of economics at George Mason University, where the default ideology favors free markets and the norm of public engagement means that many professors are active with blogs, podcasts, and popular books.

Leeson’s Hook fits squarely in that tradition by explaining how pirates managed to plunder without fighting each other or getting caught.

Leeson’s central question is: “How can pirates cooperate without appeal to the formal authorities that most of us rely on to maintain order and promote cooperation?”

Related: The rules prisoners enforce among themselves.

The short answer is: By establishing institutions (formal rules and informal norms) that reward cooperation and punish defection. These institutions, Leeson writes, bring wealth to pirates as if “guided by an invisible hook” — a rephrasing of Adam Smith’s famous observation — that investors benefit others as a side effect of pursuing their own profits, i.e.,

He generally, indeed, neither intends to promote the public interest, nor knows how much he is promoting it. By preferring the support of domestic to that of foreign industry, he intends only his own security; and by directing that industry in such a manner as its produce may be of the greatest value, he intends only his own gain, and he is in this, as in many other cases, led by an invisible hand to promote an end which was no part of his intention.

As an interesting footnote, consider that the “golden age” of piracy (1716-1726) took place before Smith discussed the invisible hand. I don’t think he was thinking of pirates, but here’s yet another example of academics “discovering” a phenomenon that’s been obvious for ages to normal people.

Contextual preamble done. Now let’s get to my notes on the book:

Leeson’s book gives an entertaining insight into the world of pirates — and the economics under which they lived and prospered (until authorities changed rules and applied far more effort into capturing them around 1730).

My one-hooked conclusion is that that anyone interested in economics (or piracy) should read this book (rather than Freakonomics or Doughnut Economics) because it’s fun and thought-provoking. I give this book five stars.