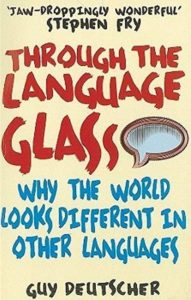 I’m a language geek and borrowed this 2010 book by Guy Deutscher from a friend.

The book is interesting but too long. Deutscher takes too much room for his own work, i.e., over 100 pages on words to describe color (more below) but only 20 pages on the language of gender.

This review will therefore record my summary takeaways, for those readers who have better things to do with their time 😉

My one-handed conclusion is that all languages are useful, but some are harder to learn than others, often due to their distance from one’s mother tongue. I give this book three stars.