I was a bit surprised to hear (from one of my students) that China banned the import of “low value materials” for recycling in the country in July 2017. This move has raised panic in many countries that had been using China as a “dumping ground” but also some head shaking among economists who prefer to see more, rather than less trade, as trade allows countries and people to specialize in what they do best (“comparative advantage”).

I think those reactions are not as important as two other points.

First, it shows that the Chinese government is willing to “stand up” for its people, by blocking the import of garbage. That perspective might be slightly distorted by nationalism and NIMBYism, but it is probably more popular with citizens than efficiency or potential job losses in the recycling industry. (It’s also popular with proponents of the “circular economy” who want to see more local management of inputs and waste outputs.)

Second, I don’t think there will be many job losses, as this move fits into a trend of “greening” China that has been developing over the past decade. This trend might be invisible in the statistics for air quality or coal consumption, just as it is perhaps over-emphasized in the massive deployment of solar and wind power, but there’s clearly something going on. In this case, I see an “interesting” (not accidental) confluence between the sudden drop in international demand for Chinese recycling services (via the ban on imports) and a growing desire to clean up China, which translates into a domestic demand for recycling. The ban, in other words, might be part of a plan to shift Chinese productive capacity towards domestic consumers.

For evidence of an intentional shift, I’ll note that China has been placing less emphasis on export-led economic growth and more emphasis on the domestic-driven sort (since the 2011-2015 Five Year Plan), meaning that an increasing share of firms and workers are now selling goods and services to fellow citizens rather than internationally. *

How far do they want to go? Guess… 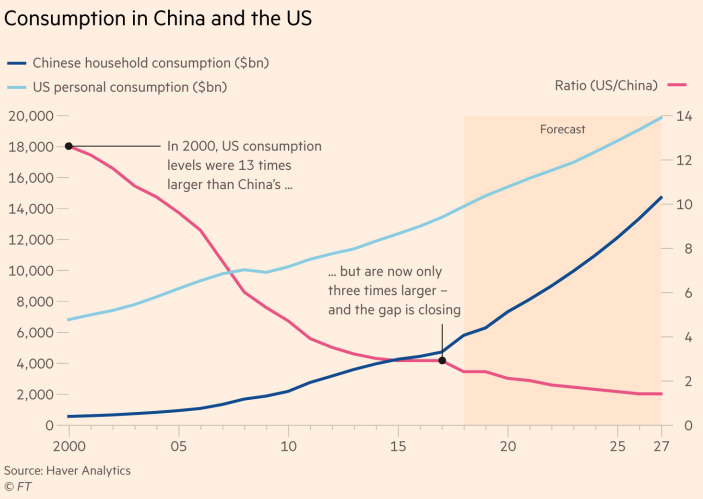 My one-handed conclusion is that China’s ban on imported waste is part of its ongoing policy of improving life for its increasingly wealthy citizens who demand better, cleaner lives.