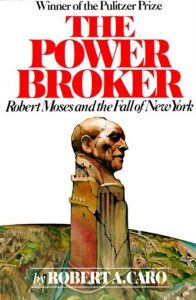 I gave up around page 300 of this 1,200 page book by Robert Caro (1974). It’s not that it’s too long but that it’s too detailed. That is the point of an authoritative biography, of course, but I also just didn’t like its subject: Robert Moses.

Moses started off as the poor but smart kid who wanted to do good. Then he got “clever” at getting his way, and power began to corrupt his idea of good — as well as shielding him from (or allowing him to ignore) critical feedback.

The result, which grew and metastasized, was a series of policies and projects that served fewer and fewer of the citizens of the city and state of New York and more and more of the ideology of Moses. It’s just painful to read a book whose “narrative arc” goes from good to bad — and I’m a pessimist!

He was, famously, an iconoclast who had no problem destroying some of the best of New York’s public architecture. He was also a racist who saw no issues with destroying minority neighborhoods to build highways and offramps for suburban white commuters.

His most famous nemesis (he had many detractors, whom he often ignored, belittled and ruined) was Jane Jacobs — the author of a robust defense of the organic, bottom-up qualities of cities that was not just a treatise on urbanism but a direct rebuke to the likes of Moses. (She was busy with the campaign to stop Moses from driving a road through Washington Square in SoHo.)

Jacobs went on to influence many. Moses’s impacts were less benign but just as enduring: The destruction of quality urban living in a quest to model society to his narrow, bigoted vision. The fact that “others did it” in other cities is no excuse.

(Not-fun fact: Mark Rutte — the current, 4-time Dutch Prime Minister — says this is his favorite book. Fucking scary — even if he says “it’s not possible in Netherlands”.)

I give this book 4-stars for existing in its entire, incredibly detailed and insightful form; I just wish there was a 200 page version!

4 thoughts on “Review: The Power Broker”