Many cities around the world are facing water scarcity, and so is Miami. Although Miami may seem to have abundant water, it’s mostly salty Atlantic Ocean water. Miami actually gets its drinking water from groundwater aquifers. The Biscayne Aquifer provides 90% of the drinking water to Miami and surrounding areas.

Miami’s water scarcity is not due to overconsumption but environmental pollution. The Biscayne Aquifer is shallow and composed of very porous limestone, making it vulnerable to saltwater contamination from rising sea levels. The city’s water treatment plants cannot now desalinate water, and desalination is expensive, energy-intensive, and environmentally harmful. 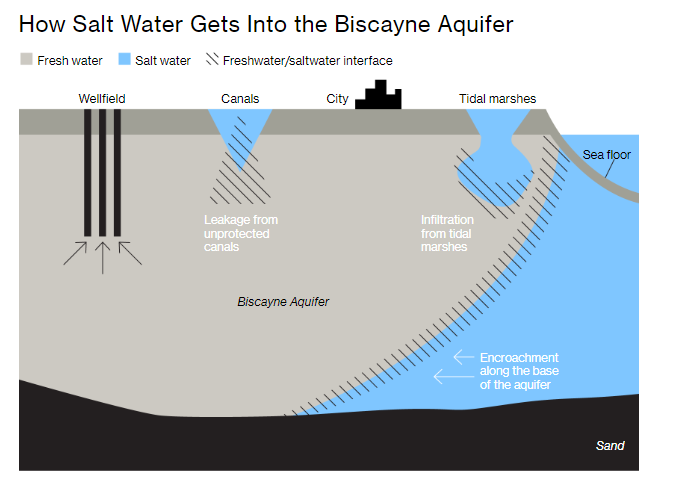 Miami’s freshwater is also vulnerable to increasing rainfall and floods. Heavy rainfall has increased 7% since 1960, contributing to more and heavier floods that damage homes and roads but also carry toxins and pollutants from Superfund sites (contaminated locations in the USA that need long-term clean-ups) into the Biscayne Aquifer. Water treatment plants of limited capacities cannot handle heavy flows, resulting in raw wastewater discharges into waterways.

An environmental watchdog group stated that Miami’s water is badly contaminated compared to other US cities Using unpublished data from the US Environmental Protection Agency, EWG found ‘forever chemicals’ in the drinking water. These chemicals (perfluoroalkyl substances, or PFAS) do not break down in the environment, and their presence has been linked to liver damage, cancer, and other health problems.

Bottom line: Miami’s drinking water is threatened by rising sea levels, floods that carry pollutants into groundwater aquifers, and treatment plants unsuited of removing salt and pollutants. The government of Miami must take action to solve these issues.