Drought. Wildfires. Rising population. The future of Sydney’s water is at serious threat, so why has the Government extended a mining company’s contract to mine under Sydney’s ‘protected’ water catchment area? The recent wildfires that devastated an area of Australia the size of the US states of Vermont and New Hampshire combined showed the world the force that is climate change. The wildfires damaged 30% of the Warragamba Dam, which provides 80% of Greater Sydney’s drinking water. The threat to Greater Sydney’s water supply is clear, yet the Government and mining company continue to degrade and deplete water supplies through the practice of longwall mining.

South32 is the mining company in question. Their longwall mining machines cut away at a wall of coal one row at a time. The process creates a pressure differential causing land to twist, warp and buckle. Water flows down through cracks into aquifers, often draining creeks, swamps and other waterways. Even if water returns for a short period, the presence of many hard metals severely reduces its quality, never mind the fall in quantity. 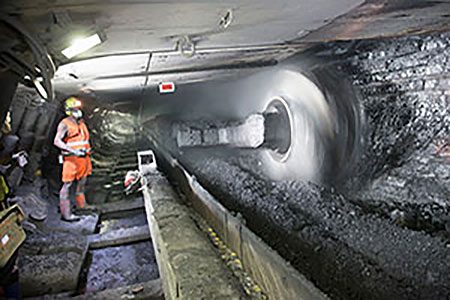 Unsurprisingly, Water NSW (responsible for supplying the state’s water) as well as local environmental groups such as Protect Our Water Alliance (POWA) oppose mining underneath the protected catchment area, yet this has not prevented the Government from extending contracts. The Subsistence Environmental Management Plan (SEMP) requires monitoring for a minimum of one year prior to mining in order to establish a base-line of environmental values in the area but scientists say this time frame is too small whilst the negative consequences continue for many years after mining has stopped. In this face-off between coal and water, it is concerning to watch the Government favour the former, though perhaps not surprising when the country’s Prime Minister advocates ‘hazard prevention’, otherwise known as deforestation.

South32’s response to criticisms are comical. Through offsetting potential subsidence-related impacts to upland swamps, using remediation techniques which have continually failed to rehabilitate, and proposing water quality improvement actions like fire management (i.e. deforestation), the company claims that the project will actually have a net beneficial effect on water quality. Unbelievable!

Ironically, mining companies may be able to exploit coal reserves underneath the catchment area but individuals are prohibited from entering the protected region, meaning that the true impact of longwall mining is  unknown to outsiders. Even so, experience abroad provides no grounds for optimism. Impacts of subsidence are long-lasting and cases in the United States have seen both surface and groundwater hydrology permanently affected. Contrary to the belief held by some of those in favour of mining, streams rarely heal naturally.

As South32 waits for approval for a contract extension until 2048, it is vital that water is valued as it should be, especially in a nation frequently overwhelmed by drought. While costs to the colliery are obvious in terms of lost production, surely there is no comparison when compared to the value of water and ecological integrity for Greater Sydney.

Bottom line: Sydney’s water scarcity issues might have been accelerated by consequences of climate change, but it is puzzling that mining’s harmful impacts on scarcity are not more strongly considered. Whilst residents and businesses face Level 2 water restrictions, there is no justification for allowing longwall mining to continue under the ‘protected’ water catchment.