Jakarta sits on a swamp, the Java sea is on the north shore, and thirteen rivers flow through it. Currently the news is swamped with images of a flooding even as the city suffers water scarcity. This man-made shortage of clean drinking water results from faulty infrastructure and contamination. Let’s break the paradox down.

The city has always been prone to flooding but the risk is increasing due to the fact that the city is sinking. North Jakarta has sunk 2,5 m in the last 10 years. The floods have become more severe due to both climate change, which results in heavier rain and sea level rise, and the sinking of the city. Jakarta is sinking due to excessive extraction of its underlying groundwater reserves. Over 60% of the city’s population relies on groundwater, especially in underdeveloped neighbourhoods. 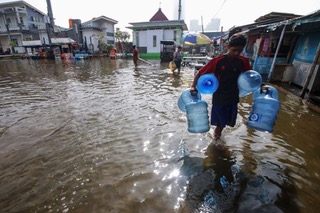 The population relies on groundwater for two reasons: faulty infrastructure and contaminated rivers. The piped network of Jakarta only reaches 60% of the city, mainly in wealthier neighbourhoods. Even more so, the tap water in Jakarta is not drinkable due to contamination from bacteria, viruses and other microorganisms, heavy metals, pesticides, chemicals and microplastics. Richer citizens drink bottled water. Others boil their water or, even though they might have the rare access to pipes, use community groundwater wells. This explains how 40% of the city lacks the water infrastructure, but 60% depends on groundwater for their water. The remaining residents without piping depend on alternative water supplies. The lack of pipes results in people illegally obtaining their water.

The rivers flowing through the city are too contaminated to supply fresh water. Part of the problem of contamination is the absence of waste services, which means residents dumping their waste into rivers that are already contaminated. The city’s largest water source is the Jatiluhur dam on the Citarum river, which is often referred to as the most polluted river in the world. It is polluted due to locals dumping their household waste into the river and around 2000 industrial factories disposing their wastewater directly into the river. The river water causes diseases and rashes, making it an unsafe water source. Hence, people are pumping their water directly from the ground; indirectly causing the city to flood.

Bottom line: Polluted rivers and faulty infrastructure cause freshwater scarcity in Jakarta, making 60% of Jakarta residents rely on groundwater. This results in the groundwater reservoirs being depleted and therefore the city is sinking rapidly. The newly submerged city now endures more severe flooding as a consequence of human actions: climate change, faulty infrastructure and pollution.