Clean water is vital to human beings and is fundamental to a functioning society. It is therefore often seen as an obligation of the government to ensure that all of its citizens have sufficient access to a clean water source. Numerous people, such as activists, argue that pricing the very poor for water is unethical and assume that increasing the price of water will always harm the poor. The City of Cape Town (CoCT), South Africa, is a useful and interesting case to reflect on this assumption. This city has one of the most unequal income distributions of the world. Providing water to the poor has always been a complex issue. Especially now, because recently this city has experienced a severe water shortage. Factors that come into play are equity, water conservation, and raising enough revenue to pay for the enormous costs of water infrastructure. 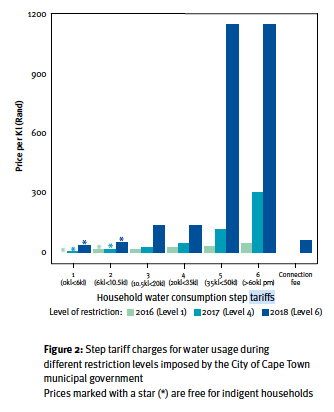 Pricing the water is almost inevitable in order to prevent shortages. There are numerous different tariff options. The CoCT has chosen an increased block rate (IBR), which they label a ‘step-tariff’. This means that if the consumed volume of water increases the price of the water also increases. This price increase is done in blocks/steps (Figure 2 source). The main reason for choosing such a tariff is because the wealthy in general have a higher consumption and therefore also have a higher tariff; they pay a larger part of the total supply cost of water and vice versa in the case of the poor. Another important reason is that an increasing volumetric price makes consumers pay attention to their use. In theory, this seems like a rational option. However, the case of Cape Town exemplifies that increased block rate pricing can have some serious ramifications, which you will read about below.

The CoCT also introduced a tool called “water management devices” (WMD’s). This meter was promoted to low-income households. If such a meter was installed, the CoCT would relieve them of their historic debt. At the same time, it would reduce demand because if this device detects leaks or excessive water consumption, the water supply will be cut off. The intent was to assist low-income households. The actual result was, however, the opposite. Most low-income households are found in the townships around Cape Town. Proper water infrastructure is often lacking, and leaks are common. As a result, the actual water use could be considerably higher than the effective water use. On top of this, people with a low income generally live with more people in one household than the official standard. This also adds up to the total water consumption of a household. The above will make the water bill soar or deprive people of sufficient water in the case of a cut-off.

Another ramification with IBR was that during the recent water crisis revenue sharply decreased because households which initially had a high-volume use shifted their consumptions. Hence, they became users in a lower block rate. The loss in revenue is especially detrimental in a time where water shortages demand for expensive investments in the water infrastructure. Coping with the decreases in revenue and to further incentivize the conservation of water, block rates increased tremendously (1st block +200%)(see fig.1). Low-income/volume users were particularly affected because they have less room to reduce consumption.

Bottom Line: The IBR is, arguably, not a proper price mechanism for the city of Cape Town. There are many different options, but pricing will always stand in the shadow of the huge historic inequality.

For more about the pricing of water: The Paradox of Water Pricing.

For more about Cape Town’s history of inequality and its water management: Water governance and justice in Cape Town: An overview