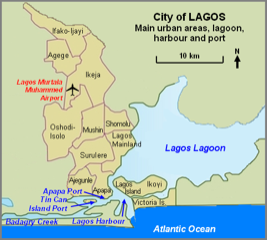 Lagos, Nigeria, is a city surrounded by water, yet for most people, obtaining it is a daily struggle. With around 65% of residents living in urban slums and an increasing population of approximately 21 million, providing water and public services is a complex obstacle that the city has yet to overcome. This post will discuss some of the logistical issues that limit water accessibility, as well as population growth as one of the causes of water shortage.

It can be argued that the growing population has been the driver of water related issues in Lagos. During the early 20th century, infrastructure was developed to supply the rapidly growing population. However, these facilities cannot support current demand, and were not maintained to a high enough standard to ensure cleanliness. One reporter found that the majority of factories in Lagos were providing water that contained contaminants and did not meet the standards of the World Health Organization. In 1980, the state created the Lagos Water Corporation to operate the existing water systems and improve public health. They are government owned and the largest water supplier in Lagos. Despite this, the LWC still only serves around 10% of the city’s residents. The remainder of the population, if lucky, purchase their water from vendors or from private boreholes. This water access is also metrocentric. This is mainly due to the poor socioeconomic conditions in Lagos as well as the antique piping that only exists in certain areas.

As mentioned previously, lacking infrastructure and poor facilities are also a major hindrance to water accessibility. Less than 30% of the population have access to piped water in any form, and even then, their supply is random. Power blackouts combined with the poor quality of production facilities result in very unreliable water supply. In addition to this, equipment and pipes are outdated and poorly maintained, leading to expensive leakages and breakdowns. Cracked pipes provide opportunity for contamination, leading to waterborne diseases such as cholera and chronic diarrhea. Around 80% of Lagos residents depend on informal water to fulfil their domestic needs, including for consumption. Allegedly, there have been many deaths in Lagos due to ingesting contaminated water and it is no secret that informal water is more likely to be a health risk. In 2014, an Al Jazeera reporter interviewed a member of the Lagos Water Corporation to gain a better understanding of water accessibility in the city. He stated that their main obstacle is the lack of electricity and infrastructure. In addition to this, he was concerned about the adverse environmental impacts of over abstraction of ground water. Despite this, there does not seem to be a choice for most residents.

Until supply can be increased and made accessible, the use of informal water is likely to increase and for many will be the norm.

Bottom Line: Lagos has to change, quickly. Rising population means the government needs to address its water challenge if it wants to preserve public health.