Hurricane Katrina devastated New Orleans, and the subsequent lack of response and aid reverberated across the United States. The lack of communication, funding and support that New Orleans residents received during the disaster has persisted for the past 15 years and the city’s water scarcity issues have not been exempt. Given the city’s historic vulnerability to natural disasters, one would assume that transparency, communication and active aid services would be of the utmost priority to federal and local regulators. Unfortunately, even non-residents can see this is not the case. NOLA’s water management is characterized by contradiction and ambiguity. Accessible resources are scarce. Information that is available is unclear and potentially dangerously misleading.

First, let us assess the regulations. The Sewage and Water Board is the regulator for drinking and wastewater in the Greater New Orleans area. The standards for water quality and plant conditions are set and enforced by the Environmental Protection Agency (EPA), which has claimed that the city’s water quality exceeded standards, but failed to specify the details and results of the testing that did take place. The Environmental Working Group (EWG), a non-profit that runs water quality testing nationwide, showed that the Carrollton Plant has tested positive for 28 contaminants, 8 of which drastically exceed the EWG’s health guidelines and include substances like Chloroform, Radium, Nitrate and Nitrite, all of which are carcinogenic. The New Orleans Algiers plant showed similar results with 24 total contaminants, 10 of which exceeded health guidelines. EWG’s website also states that both the water plants have passed the legal requirements for water quality but those legal requirements have not been updated in 20 years.

The next issue concerns the regulators. A recent interview with Buzzfeed News exposed some of these concerns. Four senior water board employees showed that they did not know how many lead service lines existed in the city or where they were, nor were there any valid records of high risk houses or lead lines. The EPA requires the city to test at least 80 homes with lead piping every three years but the aforementioned article revealed that former water board chief and employees tested the lead in their houses and those of their friends as opposed to the high risk houses they were supposed to test. Louisiana State University’s School of Public Health found higher lead levels than those published by the board: 96% of 1,604 samples had detectable lead (see figure). 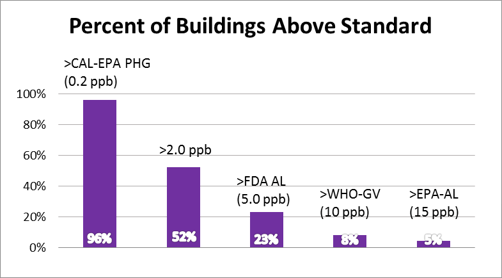 The Sewage and Water Board has a seemingly never ending flow of reassuring remarks for its residents that water infrastructure is in top shape. Local journalists, however, report frequent water main breaks [link available to US-based internet users]; boil water advisory notices are regularly posted [link available to US-based internet users]; and the 106 year old Carrollton plant, responsible for almost all the city’s drinking water, recently suffered a major turbine explosion with no follow up from the regulator.

Bottom Line: The lack of service, transparency and honesty that the Sewage and Water Board have displayed is putting the lives of New Orleans residents and the city’s future in danger.