Global issues like climate change require governments to invest in ways that will cost them in the present to hopefully provide a better future. But, investing in the future is a lot harder when you are already struggling with investing in the present. The wealthiest of countries are having a hard time making such a change. For low-income countries, it seems near impossible due to a lack of government capacity. 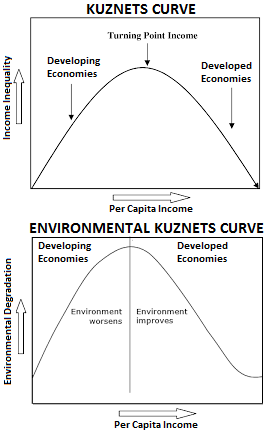 The original Kuznets curve illustrates that as a country goes through economic development, inequality will first increase. When, due to economic growth, the government has a high enough revenue through taxes, it can set up a welfare system and inequality will go down again. The environmental Kuznets curve is based on the original curve and argues that as a country develops, pollution will first go up. However, when the country reaches a certain level of economic growth, pollution will go down again through technical innovation and switching from fossil fuels to green energy.

However, climate change is knocking on everyone’s door, albeit often a bit more urgently on those of poorer countries. Countries that have not reached the level of economic development that the environmental Kuznets curve talks about are being forced to deal with climate change before they are, in a sense, ready. This force is coming from either them being directly affected by climate change or through international pressures, such as the UN’s Sustainable Development Goals.

Low-income countries often do not have the capacity to invest in the future as their tax revenue is still low. They have not reached the point of economic development in the original Kuznets curve where they have enough tax revenue to set up a welfare system, let alone to invest in the future. A big struggle in raising the needed tax revenue to finance public spending in low-income countries is that the economy is largely informal. Many people have a varying income and are often paid in cash, making income tax hard to implement. Consumer taxes are equally hard because many people shop at smaller stores that might not keep an accurate account of sales and inventories. In such a situation, one would ideally tax the rich more heavily than the poor as they often have a more formal and constant income or assets to tax. However, these figures often have considerable political sway to prevent them from being taxed more. Furthermore, creating an administrative body that is well-educated, well-trained and well-paid has proven difficult as there is a lack of funding, coming from a lack of tax revenue. As you can see, a rather vicious cycle occurs.

Low-income countries that are still very much to the left of the turning point in any Kuznets curve are thus being pressured to make changes surrounding climate change that they cannot afford due to low tax revenue. Furthermore, these changes will most likely hurt current economic activity in the country, leading to an even larger need for public spending and simultaneously even less tax income.

Bottom line: Countries all over the world will have to work together to combat climate change by making some necessary adjustments to the way we live. Countries that do not have the capacity, due to a lack of tax revenue, to provide welfare will also be the countries that will struggle most with these adjustments.