The black market is not as bad as many policymakers believe. It provides a lot of otherwise unemployed individuals with labor and income. Formalization of the economy is vital since it allows for more development through taxation, which is especially the case in countries with a huge informal market such as Bangladesh. However, this does not mean the informal economy is only bad news.

Informal businesses collectively employ fully half the world’s workers. Often, the black market is considered to be harmful to a country’s development. However, small, illegal, off-the-books businesses collectively account for trillions of dollars in commerce. These enterprises are essential for entrepreneurialism, innovation, and self-reliance. Furthermore, black markets have grown during the international recession, adding jobs, increasing sales, and improving the lives of hundreds of millions. Thus, black markets offer more than meets the eye.

The reason the informal market troubles a lot of policymakers is because it is associated with low productivity and poverty. It is generally believed that the primary solution to a large informal economy is economic growth. More formal employment leads to more taxation, which can then lead to better education, which can help people transfer from informal to formal labor. The figure below shows that an increase in GDP is associated with a lower share of informal employment. However, this trend does not occur in all countries. 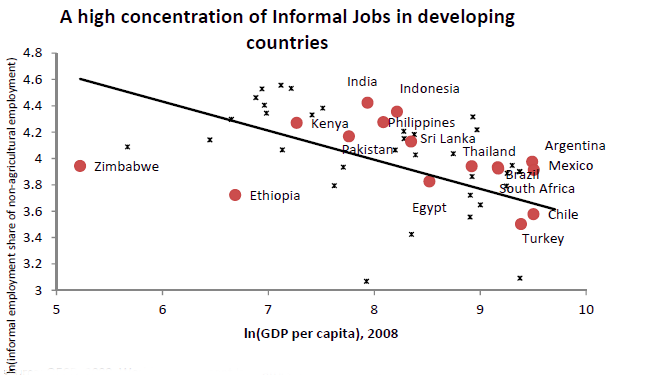 In Bangladesh, specifically, the informal economy has grown to a vast size. It currently accounts for 89% of the total labor force, constituting 64% of the country’s GDP. The informal market has grown despite a steady rate of economic growth for the last three decades. The increase of the informal market is driven by the large population, the dominance of young age groups, and an increase in female participation in the labor market. Furthermore, Bangladesh’s economy is witnessing a significant growth of service sector jobs ahead of manufacturing jobs, forcing a lot of people to work in the black market.

Second, policymakers need to shift from promoting service sector jobs to providing industrial employment and investing in education. Often people are informally employed, not because they want to but because they have to. By providing these individuals with jobs and education, they could transfer into the formal market, where there can work under better conditions for a better wage.

Bottom Line: Productive work is helpful, formal or not.

3 thoughts on “The bright side of the black market”