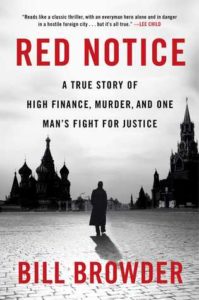 This is a very short review for a very good book. My review is short because the 2015 book reads more like a fast-paced thriller than the  non-fiction catastrophe it documents.

The author is Bill Browder, an American-born, British-based investment banker who got rich investing in the chaos of 1990s Eastern Europe and Russia. In many cases, he and his team got rich by buying shares in companies that were not as badly managed as others assumed. In other cases, they exposed corruption and catalyzed reforms that improved company governance.

Those early stories form the first half of the book. The second half tells a gripping, surreal and tragic story of how Browder and his team were punished for crossing lines laid down by Vladimir Putin, his cronies, and the corrupt officials in his government. The details do justice to the old claim that Russia is “a riddle, wrapped in a mystery, inside an enigma.” They also show that Russian is run by thugs who will lie, torture and murder anyone standing in the way of their pillaging of businesses, government assets, and pretty much anyone they feel like exploiting.

Remember that Trump is a big fan of Putin. Americans are lucky that their government still holds Trump back from killing his critics — something that Putin’s government does not do. Hundreds of journalists have been killed during Putin’s reign. (Trump said it was OK for journalists to die in Russia.) Businessmen, politicians and others opposed to Putin’s dictatorship have also been assassinated.

The pivotal element in the book — and the reason that Browder redirected his life from investment banking (he’s still wealthy) to human rights — is the illegal arrest, torture (for 358 days) and murder of Sergei Magnitsky, a Russian lawyer employed by Browder who uncovered a $230 million tax fraud perpetuated by Russian security officials. Magnitsky’s torture and murder by “law enforcers” illustrates how the “rule of law” does not apply to those in power or protect ordinary Russians.

Sadly, the only good result of Magnitsky’s murder is the Magnitsky Act, a law passed by the US Congress in 2012 that names and sanctions corrupt and violent members of the Russian government. (The Act was expanded to corrupt individuals in other countries in 2016.)

Putin has asked Trump and Trump’s personal cronies to undermine the Act, but Trump’s initial support fell away as soon as the idea reached the public.

In sum, I strongly recommend this book to anyone who wants to see the world Russians live in — and the America Trump wants. Five stars.