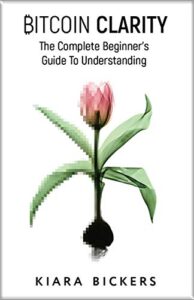 Kiara Bickers, the author of this 2019 book, sent me a copy because I reviewed Digital Gold: Bitcoin, the Inside Story. As an economist with an interest in how bitcoin, blockchains, and crypto-assets are evolving, I agreed to look at her book.

In short, I found it insightful and interesting. I learned some useful stuff, but there were also some weaknesses.

The book is divided into four parts (conceptual reframing, analysis & knowledge, properties of the system, and synthesis & understanding), i.e., “what’s the idea, how does it work, how do people use it, and how can I get involved?” Some of these topics can get quite technical, but Bickers has a friendly tone and uses sketches to lay a foundation that readers can build on with further research.

(I’m now thinking the “bitcoin ecosystem” may now be too complex for anyone to understand.* The “crypto” ecosystem, of which bitcoin plays a small but significant part, is even more complex, confusing and chaotic.)

Here are some thoughts and highlights I noted while reading…

Part one explains bitcoin and the Blockchain (capital B, to distinguish it from many other blockchains that use similar protocols), two related ideas that depend on public key/private key cryptography. In my understanding, the blockchain records transactions linking bitcoins to various addresses that function as “safes.”

A miner is rewarded with bitcoin when they solve a math problem before other miners — all of them using special computer hardware and lots of electricity. Reward bitcoins are recorded in new blocks that also (and this is really important) record transfers of existing bitcoins among addresses. These actions mean that bitcoins, which can be divided into one million satoshis (think milli-pennies) are stored at an address until all or part of the bitcoin is  reassigned to a new address. Some addresses can be “rich” with many bitcoins but many addresses are empty. Transfers only occur when the person controlling coins at an address “signs” (cryptographically approves) a transfer to another address. Approved transfers are then bundled into new blocks that are added to the end of the Blockchain, copies of which are kept all over the world on “full nodes” (simple computers that do not use much electricity).

I learned from Bickers’s description of these steps. First, miners do the work but full nodes display the results of work, which — in the case of bitcoin — consists of a shared public ledger that shows where bitcoins are held as well as confirming when and where bitcoins are transferred. (I say “shared” in the sense that over 100,000 nodes agree have copies of the same Blockchain, which keeps the system “secure” from those who want to shut down the system or spend coins they do not have.)

Second, the combination of bitcoin+Blockchain is elegant and effective, just as many “alt coins” (or shit coins) and/or blockchains are solutions in search of problems. (Read “Blockchain, the amazing solution for almost nothing,” which is insightful, funny and cringy, and this academic analysis of the many useless projects that are burning government and enterprise cash without producing value, let alone evidence of success.)

Third, bitcoin/Blockchain are “trustless” in the sense that you can use them without needing to trust any person, organization or government.* This characteristic explains how and why people get scammed by so many alt-coins, but also why bitcoin is popular in dysfunctional countries (Turkey, Venezuela, and Zimbabwe spring to mind). Trustless doesn’t mean simple, by the way, which is why the “bitcoin industry” of consultants, speakers and services has sprung up. (Bickers offers her own advice to paying clients.)

Fourth, a lot of people think bitcoin is a terrible “payments solution” because it records a few hundred transactions every 10 minutes, rather than thousands of transactions per second, like Visa/Mastercard. This critique misses the point of the 10-minute block: to help synchronize 100,000+ copies of the Blockchain held in nodes around the world. Slow but secure is why many people see bitcoin more as digital gold (an asset) than as a digital currency.

Part two gets into some deep technical analysis, but it’s quite interesting.

I like the idea of the Blockchain as a method of “triple-entry bookkeeping” that shows where bitcoin have been subtracted (sender) and added (receiver) — the double-entry part — but also giving a global view of where all bitcoin are. (Bitcoin transactions are not anonymous but in plain view on the Blockchain; the tricky part is identifying who controls bitcoin at various addresses.)

Bickers is a fan of Austrian economists and “full” (as opposed to fractional) reserve banking, and the Blockchain’s “triple entry” nature means it’s impossible to inflate bitcoin by printing more (miners can’t get paid when they try that) or trading more (nodes prevent “double spending”), which gives bitcoin an advantage over fiat currencies that have value because governments say so. Although most of us trust US dollars or Euros, others want trustless, “sound” money as a hedge against printing new money and inflating the money supply via fractional reserves. (I keep a wad of 100 Bolivares notes as a handy reminder of how Venezuela debased its citizens’  savings. The wad of 100 notes was worth around USD2,500 in 2013, but only USD0.01 in 2018.)

The rest of Part two is technical but not unclear, covering transactions, node networks, mining and smart contracts. In that last chapter, Bickers does a pretty good job demolishing the 1,000-plus altcoins and blockchains that claim to be “trustless” but deliver scams and broken promises.

In Part three, Bickers discusses governance and decentralization, both of which exhibit robust stability under game-theoretic conditions in which many players in many roles cooperate via self-interest without creating vulnerabilities that can be taken over by insiders or outsiders.

When she turns to “the economics of money,” she falters, misinterpreting and misunderstanding comparative advantage, Smith’s interested bystander, the labor theory of value, quantitive easing, mortgage-backed securities, and service-sector inflation. I think most of these errors arise from her reading of biased, unreliable sources. Perhaps they can be fixed in edition 2.0?

Part four covers markets, hype cycles, and a healthy mindset for switching from fiat to bitcoin. These philosophical chapters draw on Bickers’s self-identity as a university drop-out pursuing a career in bitcoin. Although the discussion was useful, there were also errors in explaining the origin of “HODL”, the problem of known unknowns, and valuing growth stocks. Even so, the chapter ends with a heartfelt and welcome call to rebel against the status quo

My one-handed conclusion is that this book offers insights, explains complex ideas, and gives plenty of material to ponder. Although weakened by some preventable mistakes, I recommend it to anyone interested in bitcoin. FOUR STARS.

* 2 Nov 2020: I think it’s helpful to think of Bitcoin/Blockchain as a new (digital) species whose evolution, use and “goals” are beyond our control but important in our lives. If the 80s were the decade of the PC, 90s of the Internet/WWW, 00s of mobile phones, and 2010s of social media, then what consumer tech will dominate the 2020s? Bitcoin and crypto might be that tech.

Addendum: On bitcoin adoption: Discovering Digital Gold and Bitcoin and The American West

Feb 16: Ray Dalio and his researchers put out a great note on Bitcoin.