One of the more important actors in the carbon cycle of the world are phytoplankton. Thinking on a global scale, two big carbon sinks stand out. Namely, vegetation and the oceans. Phytoplankton are responsible for most of the transfer of carbon dioxide from the atmosphere and into the oceans, via photosynthesis that produces half the oxygen on Earth.

Phytoplankton also form the foundation of many aquatic food webs. They are food for zooplankton, crustaceans, small sharks, whales and other big fish and mammals indirectly Unfortunately, phytoplankton are disappearing. Research shows that there is a 40 percent reduction in the global phytoplankton population since the 1950s. The rise in global sea temperatures is thought of as the main driver of decline. But much more research is needed to understand the reductions of these populations.

Whales, similarly, act their part in the carbon cycle. This is also referred to as the ‘biological pump’, or the ‘whale pump’. This process removes carbon and nitrogen from the sunlit zone of the sea and sends those elements downwards through a downward flux of aggregates, feces, and vertical migration on invertebrates and fish. Whales, in the process of foraging deep in the oceans and coming up for air to breathe, release nitrogenous nutrients through their urea (pee) and fecal plumes (poo). That process means more nutrients for primary producers such as phytoplankton. Additionally, when whales die, they sink to the bottom of the ocean, taking all that accumulated carbon with them. The whale carcasses also act as a host to a variety of species, such as snails, mollusks and bacteria that live on the bottom of the ocean. 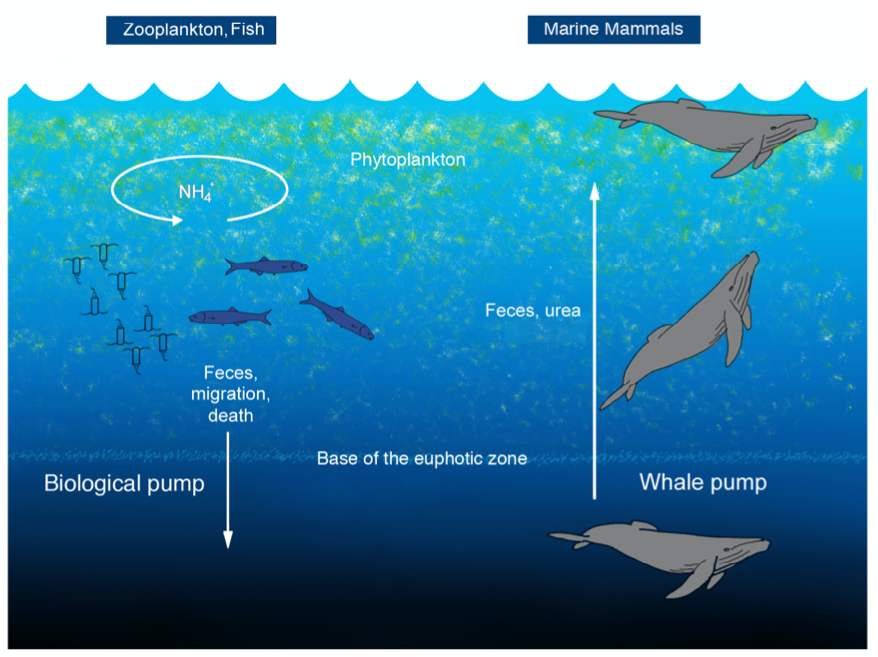 This nutrient cycling has important implications for policy makers, as healthy whale populations can potentially slow or stabilize the decline of phytoplankton and other species. The real-world implications of slow but irreversible ecosystem changes are difficult to predict. Thus, humans should be extra cautious about the ways in which they interact with their environment.

Bottom line: The example of human impacts on whale and phytoplankton populations shows that we do not fully understand the complexities of ecosystems and our impacts on them.

2 thoughts on “The importance of whale poo”