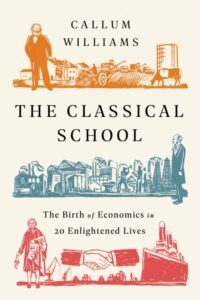 I bought this 2020 book by Callum Williams after I heard this podcast with him.

I like reading history of economic thought books because it’s interesting to see how economics has evolved over the centuries and useful to compare cumulative misunderstandings with what long-dead thinkers actually said. (That’s why I am reading and blogging on Alfred Marshall’s 1920 Principles of Economics.)

Adam Smith’s 1776 Wealth of Nations (WoN) is widely considered to mark the start of economics, although it was then called “moral philosophy” before changing to “political-economy” in the 1800s and “economics” in the 1900s (roughly).

Overall, I found this book to be interesting, but not nearly as inspiring as the classic Worldly Philosophers: The Lives, Times and Ideas of the Great Economic Thinkers, which has been in print since Heilbroner published it in 1953. Williams has a tough act to follow.

In this review (as usual), I offer thoughts based on highlights and notes I made while reading.

And with those 2,500+ words, I come to this one-handed conclusion: (Political) economists, from undergraduate to PhD, should read this book (and books like it) to understand where we came from, where we made mistakes, and how individuals and personalities affected our thinking. It is only with knowledge and humility that we can offer good advice on the everyday business of life. For others, I am not sure if this will be quite the page-turner as Heilbroner’s classic. FOUR STARS.