§1. Wages might reflect custom more than current values. In cases where the interaction of supply and demand pushes down wages, workers’ difficult conditions are made worse.

§2. A businessman investing in machines (or slaves) will do so with the intention of future returns. Improvements to workers stays with those workers, which can lead to underinvestment by outsiders but efficient investment if the worker makes those decisions. (Marshall quotes Smith’s point that a slave-owner will not invest as wisely as the slave would themself.) While parents are eager to invest in their children (converting financial into human capital), it is easier for middle-class parents than working-class parents, which can trap generations in poverty.

§3. Within families, the father can earn wages to help the family and introduce his sons into trade, while the mother raises and improves children as they grow. Among the poor, fathers are often tired and mothers forced to work, leaving their children worse off in the present and future.

In a footnote on page 469, Marshall discusses the “net contribution” of migrant workers and warns against overvaluing men and undervaluing women due to the their joint-importance in raising children (the next generation of workers). This topic (migration, national accounts, and brain-drain) is still hotly debated.

§4. An employer’s investment in workers will only be partially repaid in higher output and profits, but a minority of employers invest as part of their overall quest for performance. Their workers will benefit immediately, as will their families. A majority of employers will not invest more than they immediately get back — weakening future returns to themselves, their workers and society. 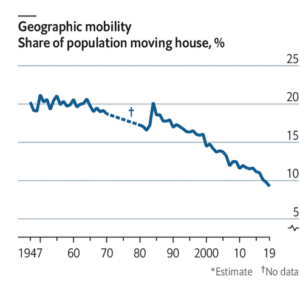 §5. The location and quality of the workplace matters. Workers will demand higher wages in dirty or dangerous workplaces. A big distance between home and workplace limits the supply of labor unless wages rise. Immobile workers have fewer options and lower wages. Related:  US-labor mobility is at an all-time low:

§6. Workers who lose their jobs lose wages. If they do not have reserve savings, they suffer from a lack of necessities as well as a decline in their labor value based on greater hunger and poverty. (The homeless are challenged by a lack of an address for employers, bad sleeping conditions, needing to buy food “by the plate” and other burdens.) Workers with special skills and/or union membership will have greater job security and earn a larger share of their “value added.”

This post is part of a series in the Marshall 2020 Project, i.e., an excuse for me to read Alfred Marshall’s Principles of Economics (1890 first edition/1920 eighth edition), which dominated economic thinking until Van Neumann and Morgenstern’s Theory of Games and Economic Behaviour (1944) and Samuelson’s Foundations of Economic Analysis (1946) pivoted economics from institutional induction to mathematical deduction.