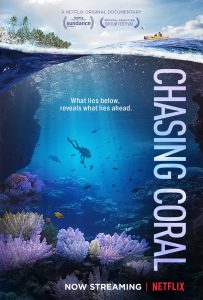 This documentary follows a team of activists, scientists and divers as they try to document the death of coral reefs. Along the way, they explain how the oceans are absorbing the brunt of the impacts of climate disruption, and how coral death is the “canary in the coal mine” of other impending impacts.

The sad part of this film is that it’s mostly about the effort to capture time lapse images of dying coral, not about actually saving the coral from death. This set of goals is mostly because so few people know that coral is dying but also because the driving force of death — net increases of GHGs — can only be countered by overcoming “the world’s greatest market failure” or what I prefer to call “the greatest tragedy of the commons.”

I’ve tried to do the same thing (raise awareness, drive action) with the Life Plus 2 Meters books that I edited and published in the last two years, so I am both supportive of this type of media and pessimistic about its potential impact in a world where people are often too busy or indifferent to act and where politicians and corporations are often pushing for more exploitation and fewer restrictions on GHG emissions, as if their additional profits will insulate them from dying ecosystems and the ensuing collapse of food chains, reduction in global oxygen supplies, etc. (For a discussion of similar impacts from the loss of polar ice, read this depressing overview.)

The movie makes a few good points about how important oceans are. The biggest is that oceans are absorbing 93% of excess heat retained by GHGs. Without this sink, we’d have average surface temperatures of 50C rather than the 14.4C we have now. Second, they explain how coral are more sensitive to warmer ocean waters because they can’t move away. The analogy they use is that a 2C (3.6 Freedom unit) fever can kill a coral just as it can kill a human. Our normal temperature is 36.8C (98.2F) and a fever starts at 37.7C/100F, which is only 1C/1.8F higher. We are, in other words cooking the coral by raising water temperatures above their viable threshold:

In the movie, the team talks about monitoring the death of coral reefs from a floating restaurant full of people who eat and dance while floating over death. Coral reefs provide food and biodiversity. Their death will lead to the collapse and death of a large share of oceanic ecosystems, which will not just be bad for divers and the 500+ million people who depend on reefs for food, but also on the rest of the world that will be more vulnerable to tsunamis that are no longer blocked by reef ecosystems, the need to feed people from other sources (raising the price of food for everyone else), and the other numerous impacts of a disrupted ocean.

Although they are eventually able to capture the before and after images of a reef that dies over the course of a few months of hot water (image below), I am sad to see that there’s still far too little attention on the looming oceanic catastrophe that is going to hit humans in the near — not far! — future. 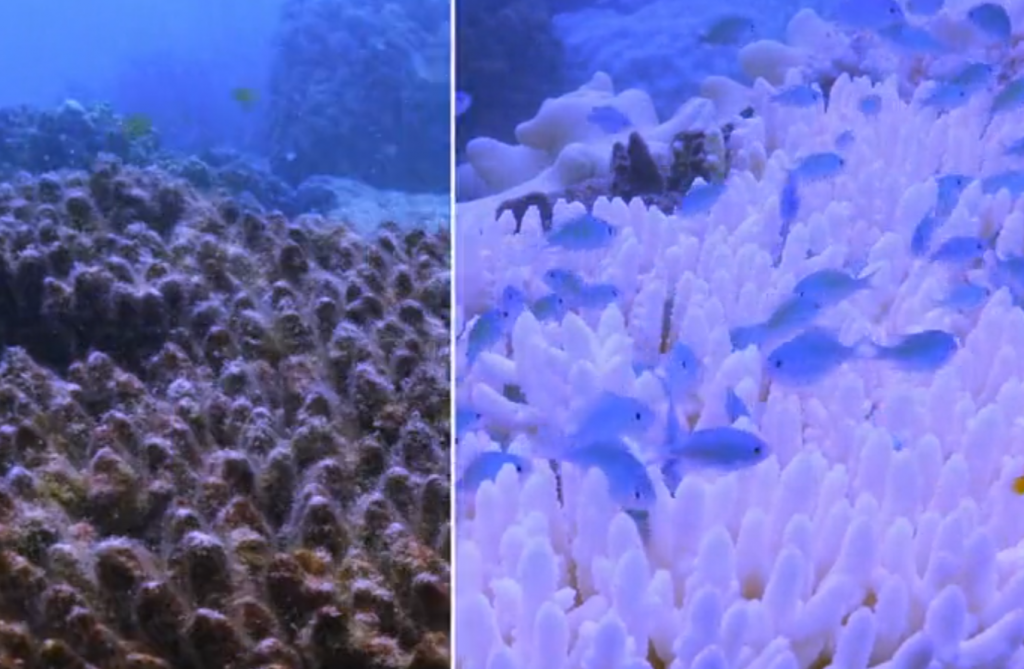 My one-handed conclusion is that we’re going to suffer a great loss of biodiversity with the death of the ocean’s corals (about half the world’s coral has died in the past 40 years, with 40% of that death occurring in the past three years). I highly recommend this film (5 stars), if only to educate yourself to a world not long with us.

To read all my reviews, go here.