Nairobi, Kenya is one of the world’s many fast-growing cities facing severe water shortages. Nairobi City Water and Sewerage Company (NCWSC) currently serves only 72 percent [pdf] of the city’s population, forcing many residents to rely on unsafe and higher priced water from kiosks and private vendors. When it comes to water, Nairobi suffers from poor governance, underinvestment and persistent regional inequality.

Tap water in Nairobi is not always safe, but the biggest issue concerning Nairobi’s water scarcity is the way in which pricing perpetuates regional discrimination and inequality. The NCWSC uses an increased block tariff, but this does not account for the initial set-up costs that most of the cities’ poor simply cannot afford. Another reason why the city’s water network is inaccessible to the poor is the need to make monthly payments. Residents of informal settlements are often paid in daily wages, so they have a hard time paying large monthly charges.

An alternative to tap water was presented in 2015 by placing water ATMs in the cities slums, accessible to residents by using a smart card. This solution was, however, both unsustainable and unreliable. The placement of water ATM’s does not tackle the inequality of infrastructure in Nairobi nor are the tanks always full, which makes them untrustworthy in times of scarcity. 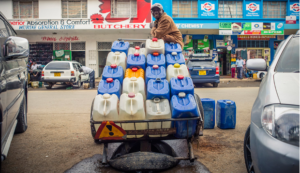 As a result, the residents of Nairobi’s informal settlements are compelled to purchase their water from private vendors. These vendors, however, charge Ksh2 – 50 (€0,015–0,38) for a (20L) jerrycan that would cost  Ksh4 (€0,03 €) from the NCWSC. Research has shown that dependence on private water vendors is positively correlated with poverty. The poor pay more to get water that’s dirtier than that consumed by the wealthier residents using NCWSC water.

Nairobi began rationing water in 2016 to cope with excess demand. In 2018, only 40% of residents had 24/7 supply. With rationing targeting 3 out of 4 quarters, inequality continues.

Yet, there might be better times ahead, as the Kenyan government has committed itself to sustainable development goal 6, ensuring availability and sustainable management of water for all by 2030. But how this objective will be realized when broken promises are the norm in Nairobi? The NCWSC plans to bring 80% water coverage [pdf] to Nairobi’s citizens by 2022, but they failed to meet that objective with a 2018 deadline. Water supply projects have been announced, but they lack funding and miss sustainability targets, according to experts.

4 thoughts on “Nairobi: Too little water, too much inequality”