Droughts are nothing new for Sydney. So how did 2019 come to be the first year in a decade in which water restrictions had to be introduced (The Guardian)? While various developments have led to this situation such as population growth or pricing, this blogpost focuses on the impact of climate change and the inadequate response from governance to the threat of water scarcity.

Let us first take a look at the changes in availability of water resulting from climate change. According to the Office of Environment and Heritage of NSW, temperatures in Australia have increased by 0.9°C since 1910 and the rate of temperature change has also increased. As the figure from the Bureau of Meteorology (below) illustrates, the temperatures in Australia have increasingly been above the mean temperature since 1980. Additionally,  these developments went hand in hand with a decrease in rainfall since 2013 (The Guardian). 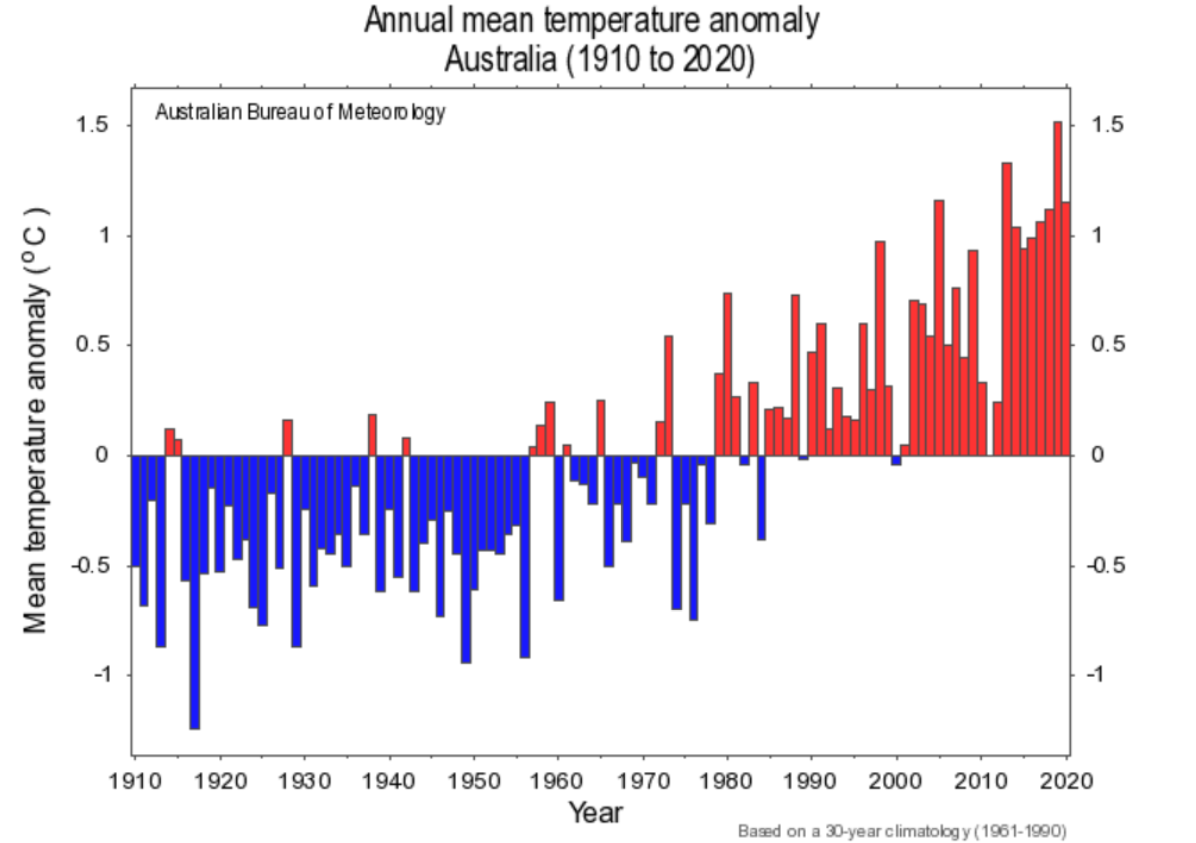 The impacts of these changes are diverse. Most important for Sydney’s water security are the reductions in runoff, greater rainfall variability, and longer & worse droughts (Climate Council). Droughts pose a serious threat to Sydney’s water supply because of the way the supply system is built: the city relies on its 15 reservoirs, the largest one behind the Warragamba dam (Bureau of Meteorology). Droughts and reduced precipitation threaten the water supply to these reservoirs (WaterNSW).  Sydney’s desalination plant constitutes the only rain-independent water source, but it can only meet 15% of the city’s demand (Sydney Desalination Plant).

Given that climate change and its consequences are not a new phenomenon, the question is how those responsible in Sydney’s water supply have prepared for droughts. There have been a few shortcomings. The Metropolitan Water Plan of 2017  is supposed to set clear objectives on how to ensure the supply of water to Greater Sydney, but the plan is (according to The Guardian) based on data from the drought in 1939 without considering changes in population or climate. Obviously, these two factors greatly affect both the demand and the availability of water. Another concern for the stability of the water supply arises from the inadequate work of the Department of Planning, Industry and Environment and Sydney Water Corporation. In 2020, the Audit Office of NSW charged both entities with failing to implement water conservation techniques from the Metropolitan Water Plan. The Department failed to assess investments or draft plans, and Sydney Water Corporation inadequately implemented existing initiatives. The Audit Office concluded that these failings leave Greater Sydney’s water supply vulnerable to droughts.

Bottom Line: Climate-change-driven droughts are putting Sydney’s water supply at risk, and inadequate governance is not helping reduce that risk.

3 thoughts on “Sydney’s droughts and governance”