With Brazil owning one-eighth of the world’s fresh water it is surprising that São Paulo has issues with water scarcity. These issues originate from population growth, destruction of surrounding forests and wetlands, leaking infrastructure, and pollution. In combination with climate impacts (such as the 2014-2015 drought), these weaknesses can lead to problems. In 2015, millions of people risked losing their water supply due to “environmental degradation” and “political cowardice”. 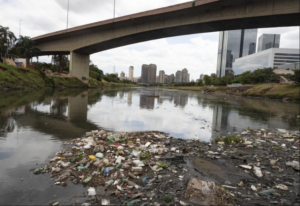 Pollution from domestic and industrial sources has reduced water availability. Historically, the growth of São Paulo has gone hand in hand with increasing river pollution, which is due to inadequate sewage collection and treatment, urban sprawl, and a lack of proper solid waste disposal. The Anchieta-Grajaù community is one of the many unregulated slums, where fecal water flows directly into surface water, making this water dangerous to consume. This lack of sanitation leads to diarrhea, general malaise, and headaches amongst many inhabitants in this community. In central São Paulo, the Pinheiros River stinks. Today 25% of the population in São Paulo lacks access to sewage systems. Sabesp, São Paulo’s water and waste company plans to expand its sewage system, which will complement efforts to remove rubbish and improve water quality in the Pinheiros.

Another issue that is necessary to tackle is leakage. According to a survey, São Paulo lost more than 30% of treated water in 2012. These leaks result from distribution failures, inadequate connections, theft, and absence of measurement. According to inhabitants Sabesp is not doing enough to fix the leakages on their doorsteps.