A superfood, the green gold, or simply the avocado; who’s not a fan? With a 27% increase in the global demand of 2017 alone, it is fair to say that the avocado business is booming. Rising revenues from avocado exports encourage production: the value of Chile’s exports increased by 76% between 2009 and 2019, from $170 million to $300 million. But what are the costs of producing green gold? 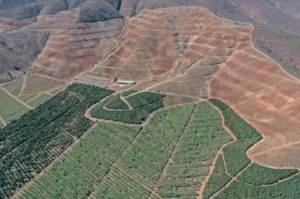 Let’s start with the environmental consequences. Avocado’s environmentally destructive monoculture depletes the soil of nutrients, threatens ecosystems, and contributes to extreme weather events. These problems exist for other mono-cultures, but avocado’s are also thirsty: one avocado requires up to 320 litres of water, or 64 times the water needed for one tomato.

This deteriorating environment inevitably impacts the Chilean citizens. In regions where water is scarce, local communities are protesting. They argue that the quantity (a 50 litre allowance per day) and quality (coliform levels above legal limits) of the water they receive violates their human rights. Local communities believe Chile’s privatised water system makes them suffer while their neighbours thrive as they sprinkle avocados with 100,000 litres per day.

In 1981, under Pinochet’s military regime, Chile’s water became privatised, so water rights can be owned and traded.** Individuals and corporations get their water rights through the Dirección General de Aguas, or simply via the open market. Once obtained, it is theirs, and the state can no longer intervene. The market grants water rights to the first applicant with the highest bid. In Chile, this system has translated into rich individuals and large international corporations hoarding water for economic purposes, through the collection of water rights, digging of wells, and instalment of pipes.

Chile’s avocado plantations thus bring great economic success, but also depleted aquifers, contaminated water, and unhappy local communities. It is hence not surprising that ‘green gold’ fuels conflict between local communities claiming water as a common good and corporations that prefer private water. Human right activists, environmentalists and local citizens protest that the water code places profit over people: “we end up drinking water with shit in it, just for them to send off some good avocados to Europe. MODATIMA, a social movement against privatised water, blames the large-scaled avocado producers for water theft, and adds that access to water should not be a privilege, but a right. On top of this, they advocate for the 2,000 local avocado farms that were sold to a few large, international corporations. Economic power should be dispersed, they claim, and “our basic human right to clean and sufficient water should be met”.

The rich individuals and corporations, however, state that these social uprisings are perception-based: the state is responsible for the initial allocation of water rights, and the market only for the reallocation of these rights. The market only reallocates 15 % of all water rights, and they therefore argue that it does not significantly contribute to the unequal distribution across sectors. Besides this, the president of Agropetroca, an association that defends the agribusinesses of Petorca, explains how local communities have actually benefitted from the economic power of this growing industry, and the new avocado farms in the region.

As summarised by Daniel Bosch, a large-scaled avocado producer in Petorca: “15 years ago, this was the poorest district of Chile, but thanks to us, this area has improved considerably. Bosch and his fellow producers do acknowledge the urgency of water scarcity and its consequences, but thus simply believe the problem lies within the initial state allocation, and not the market reallocation. They argue that water markets help to achieve a greater efficiency in water use and the reallocation of resources, and therefore actually reduce the negative impacts of droughts.

Bottom Line: Chile’s avocado plantations cause great economic success, but also depleted aquifers, contaminated water and unhappy citizens. This fuels conflict between corporations and local communities, who either love or hate Chile’s privatised water system. Whether the rights of use to water remain private or not, Chile’s main priority should be to adopt a water management strategy that is more flexible: it should respond and adapt to its rapidly-changing social, political and ecological climate, whilst providing its citizens with equal access to safe and sufficient water.

** Note from DZ: Water is “private” in terms of rights of use (usufruct) but not ownership, which remains with the State.

3 thoughts on “The green gold rush”