A few years ago, I was shocked to learn that bottled water is more expensive than bottled cola when transferring at Dubai International Airport. This exemplifies that physical water scarcity challenge Dubai is currently facing. Climate, geography, and population impact Dubai’s water management. Dubai has a “BWh climate” according to the Köppen Classification, characterized by extremely hot and arid summers where the yearly precipitation is less than 100mm. With little precipitation but intense evaporation, natural surface water (beside the Dubai Creek) is nonexistent in Dubai. Average residential water consumption per capita per day is around 270 liters, this figure is much lower than the US average but much higher than the global average (FAO). The aquifers beneath Dubai cannot meet the demand of 3.4 million residents and the commercial/ industrial sectors (Dubai Statistics Center 2021). Situated along the Persian Gulf, desalinated water meets 99.5% of demand (DEWA Annual Statistics 2019). 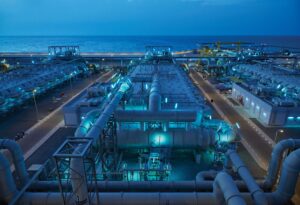 Dubai Electricity and Water Authority (DEWA) vertically integrates water governance in Dubai, from extraction and desalination to distribution and wastewater treatment. Dubai’s desalination plants use two technologies: multi-stage flash distillation (MSF) and reverse osmosis (RO) (DEWA Annual Statistics 2019). Six plants use MSF (DEWA Annual Statistics 2019). MSF involves multiple stages of flash distillation in which seawater is heated by steam that is cooled and collected from remaining saltwater, and the process repeats until only pure water and brine are left (Atherton 2017). RO uses membranes and pressure to filter saltwater (Atherton 2017). Dubai’s one RO-desalination plant accounts for 5.3% of desalination capacity (DEWA Annual Statistics 2019), but DEWA plans to increase that figure to 41% by 2030 because RO requires less energy than MSF (Khaleej Times 2021).

Cost, energy, and pollution are the three main drawbacks of desalination. Firstly, water desalination is the only viable option for large scale water consumption in Dubai because of the natural limitation of the surrounding watershed so higher costs are inevitable. Secondly, desalination is extremely energy intensive. Natural gas peers Dubai’s plants (Power Technology), so DEWA imposes a fuel surcharge of $0.0002395 per liter to partially reflect those costs (DEWA 2021). Third and arguably most important, desalination produces 50 percent more brine than clean water after (Jones et al. 2019). Since brine has a higher salt concentration than sea water, it can disrupt marine ecosystems. In addition, toxic elements such as copper and chlorine are often found in brine (Jones et al. 2019). The authorities have not conducted a holistic impact assessment of the impacts of brine discharges.

DEWA plans to build a solar-powered desalination plant that can desalinate water with clean energy and waste heat by 2030 (Gordon 2019 and Khaleej Times 2021), but it will take some time before all water sources are climate friendly.

Bottom Line: Dubai’s climate, geography, and population reflects its dependence on desalinated water even though it is more expensive, energy intensive, and polluting. Dubai is working to “green” its technology and reduce water consumption, but results have yet to reveal their effectiveness.

4 thoughts on “Desalination and water scarcity in Dubai”