In 1928, the Republican slogan “A chicken in every pot. And a car in every backyard, to boot.” was born. The aim was to raise prosperity by making privilege available to the wider public by raising the living standard at an affordable cost. Meat is seen as the food for the wealthy, and meat producers are more than happy to play in to that image. Meat has been scarce, thus a treat, for the better part of human history, rendering it to be desired by those who couldn’t have it. We feel that meat will make us strong, it is macho, and makes us feel prosperous, whilst in fact heavy consumption of meats weakens health and the environment.

The association of meat with prosperity has led to widespread government subsidies for the agricultural industry, even though many developed countries now advertise reduced meat consumption because of its environmental and health repercussions. Though these subsidies the retail price of meat is kept low, but consumers pay it indirectly through tax money, environmental degradation, and health risks. 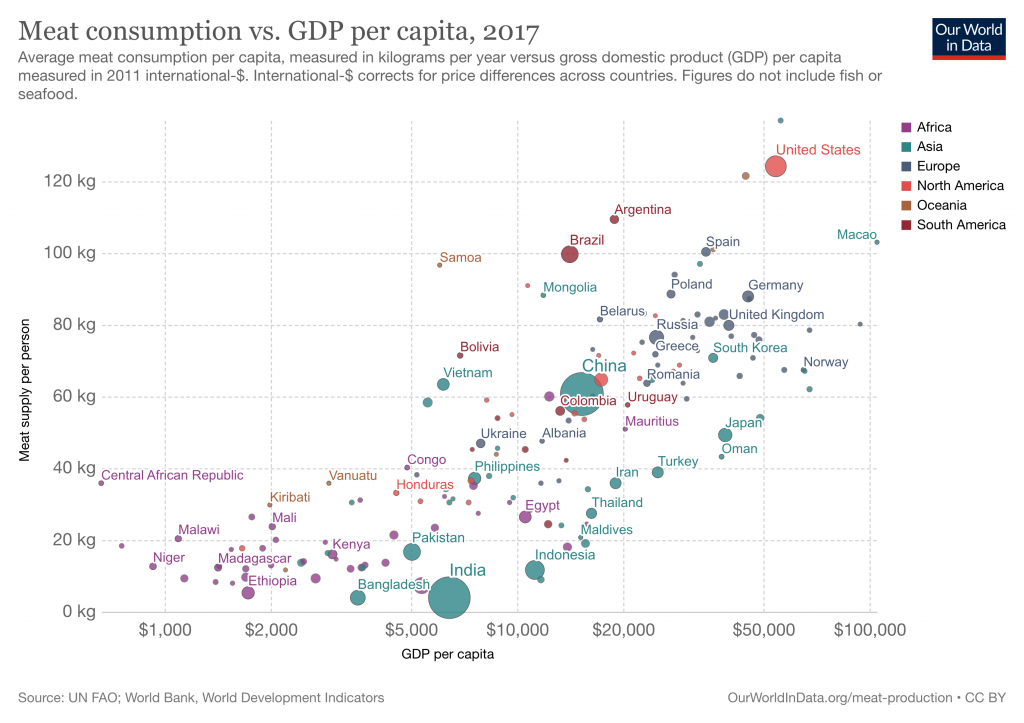 Animal products are the third-largest sources of global Green House Gas (GHG) emissions, stemming from the fuels needed to grow the feed, transportation, and their methane gas emission. Furthermore, animal products are high in water consumption and animal agriculture occupies one-third of the earths’ landmass for grazing or growing feed, making it the main driver of deforestation.

The demand for meat is expected to reach 570 million tons in 2050, double the consumption of 2008. If western consumption patterns remain unchanged, this would mean insufficient food to feed the 10 billion people population, as almost half of the world’s harvest is fed to animals. The global meat consumption rises due to growing population and increasing wealth bringing about higher demand for meat, as can be seen in the figure. China for example, is now the world’s largest meat producer and Asia produces more meat than any other region in the world.

Though there is a growing trend of plant-based living in developed countries, this will not be enough to counter the rise expected from developing countries. The solution to the issue at hand seems simple: less meat must be consumed to avoid running out of food, water, or a planet. However, for many the consumption of meat holds an aspirational or cultural value, rather than a nutritious one. Even if this was possible, is it fair for developed nations, who have enjoyed meat, to deny developing countries the same privilege? For many the answer is no, yet decreasing our own consumption is more difficult than anticipated: how do you willingly degrow?

Greenpeace lays out a plan [pdf] to half the meat and dairy consumption by 2050 to reduce GHG emissions, fight climate change, fight deforestation, preserve water quality, remain within the planetary boundaries, and battle global obesity. People will however need to be motivated to make this change at an individual level. The subsidies for meat need to be cut, bringing its price closer to the actual costs instead of supporting an unsustainable industry. More importantly, the narrative around meat needs to be changed: meat will need to become a privilege again, not just be framed as one. Perhaps most effectively, taking into account that prices and not intrinsic motivation are the best driver of behavioral change, the price will need to reflect the externalities of meat production, as well as the urgency of the climate crisis.

Bottom Line: Increasing population and income levels will lead to a significant rise in meat consumption that the planet cannot sustain. Meat consumption poses threat to the climate through its contribution to GHG emissions, heavy use of water, land use, and inefficiency. Thus, changes in consumption patterns are needed sooner rather than later, and the most effective solution seems to be price incentives.

2 thoughts on “Less chicken, more beans in every pot”