In the Netherlands, the government subsidizes education. Historically, students had to pay fees, but they were much lower than actual costs. In addition, students at university received a stipend to make sure that everyone, especially students from lower income families, could participate. In 2012, this system changed. Stipends were replaced by loans, which can scare potential students away.

The 2012 reform had one element aimed at a particular group. The previous policy gave an additional grant to students from low-income families, and the reform increased that supplement, thereby increasing in the difference between students with and without the supplement. Students not living with their parents received €14.000 less while students living with their parents received an extra €1.500, leading to a total difference of €15.500 (Bolhaar, Kuijpers, Zumbuehl, 2020). 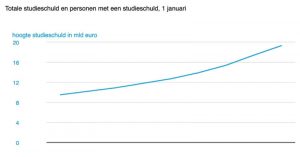 The 2012 reform led to more debt for Dutch students (see figure) due to an increase in the price of education but also changes in student behavior. Some students borrowed more money and worked less. Other students worked the same but borrowed more. Why this happened is not clear, but the effects of this loan system can be devastating as students graduate with more debt. For students who will earn more, extra debt may not be a problem, but that debt will be a burden on those whose earnings do not rise as fast as their debt (Bolhaar, Kuijpers, Zumbuehl, 2020; Scheer, Visser, 2020) .

The bright side of this reform is that the university enrolment did not change but is the extra debt sustainable?

Bottom Line: The 2012 reform has led to more debt for more Dutch students. Students do not seem to mind this system, but their increasing debt may not sustainable. Should the reform remain as it is or is a “reform to the reform” necessary?