It was with relief and a good dose of surprise that the news was heard in January: Germany will achieve its targeted emission limits for 2020. Although this previously seemed out of reach, the COVID-19 pandemic allowed emissions to be reduced by 42.3%. But this is not enough. It has been long known that coal must be phased out to mitigate climate change and meet the 2015 Paris promise of keeping global warming below 2 degrees.

Germany is the largest producer of coal in Europe (see image). The energy sector constituted the largest share of CO2 emissions in 2018, with 34% of energy gained through coal in 2017. In 2020, the government announced the coal phase-out by 2038. It will be driven by increasing CO2 prices and state-ordered shutdowns of coal-fired powerplants. 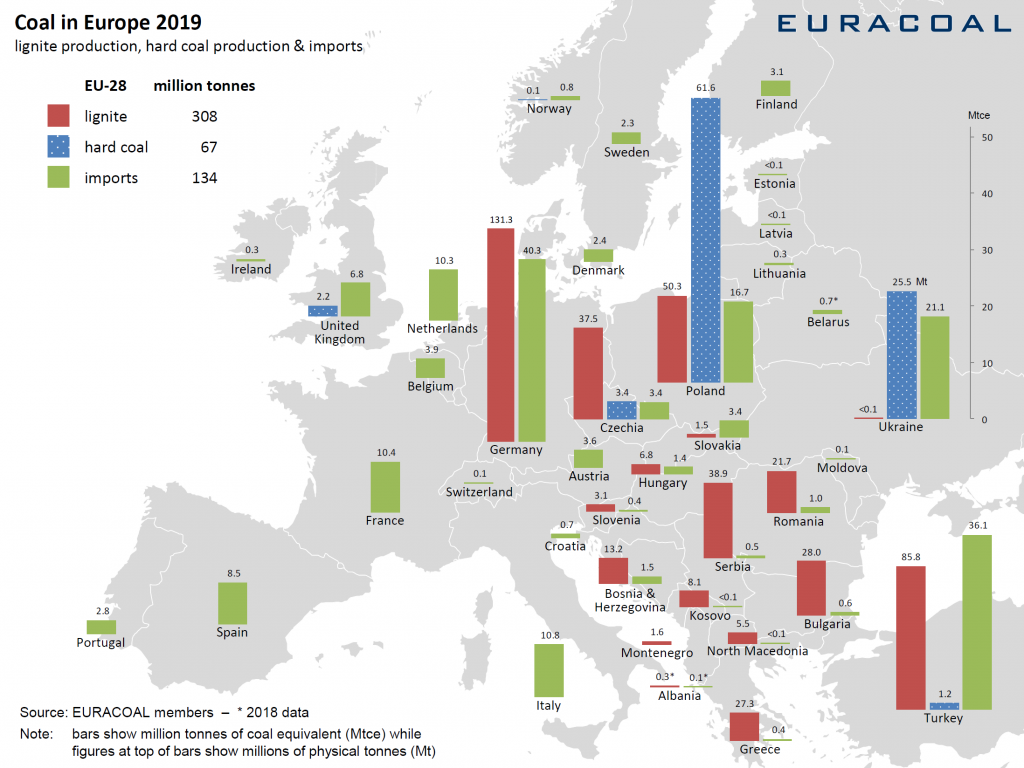 Moreover, it has recently become obvious that even from a purely economic point of view, the coal industry is ceasing to be profitable. This is mostly due to negative externalities caused by extensive greenhouse gas emissions. As CO2 emissions have been quantified and monetized by the EU’s Emission Trade System (ETS), production costs of coal energy will steadily increase. Additionally, the increasing competitiveness of renewable energies has resulted in lower electricity prices and hence decreasing market share for coal. Lignite mining will be economically unprofitable by 2030.

To compensate for possible financial losses of the industry, the government will pay more than 4 billion euros to two of the biggest energy firms, RWE and LEAG. However, this amount appears to be €1.9 billion more than the firms realistically need to finance the transition. Moreover, despite the grim outlooks for the industry, RWE – the biggest producer of CO2 in Europe – is still deforesting areas and relocating villages to expand coal powerplants. This brings up the question of the role and interests of big energy firms in the coal-phase out.

According to economic theory, inefficient firms should be eliminated under perfect competition as new firms enter the market and compete for profits in the long run. Thereby, resources are allocated to the most efficient producers. This theory does not hold in Germany, where the energy market has an oligopolistic structure, allowing big firms to keep producing despite cost disadvantages. One source of such imperfect competition can be lobbying and bribe-paying. A major lobbyist against the coal phase-out has been the “Wirtschaftsrat” (an association representing the interests of 12.000 businesses) – known for its proximity to the CDU, which is in the ruling coalition. More specifically, RWE’s close relationship to CDU politicians has given the company significant political influence, such as in the commission on energy-policy.

The interests of big energy firms run against the public interest when it comes to Germany’s coal phase-out. Firms want to avoid losses and stranded assets by producing as long as possible. The “public interest” does not automatically mean pursuing sustainability goals, but it does mean allocating resources (including labor) to future-proof industries, reducing emissions, promoting ‘clean’ energies, and facilitating job transitions.

Bottom Line: The market power of Germany’s big energy firms allows them to sustain inefficient production against the public interest.