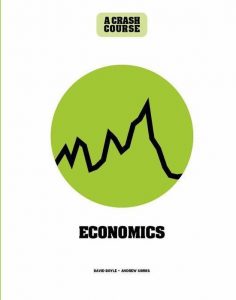 I bought this 2019 book by David Boyle and Andrew Simms with the hope that I could lend it to students to give them a decent introduction to economics (the book’s subtitle is “become an instant expert”).

Sadly, the book is too polemic — and too misleading — to fit this role. In fact, it’s terrible.

Disclosure: I only read the first 15 or so of the book’s 52 chapters, as the authors’ constant insinuations (see examples below) and biased “balancing” getting in the way of the economics. Skeptical of my method? Complain to Tyler.

I started off with hope that Boyle and Simms, both associated with the New Weather Institute and New Economics Foundation (see a pattern?), would explain “old” (neoclassical) economics and then bridge into the “new” (heterodox, post-autistic) economics that, they claim, are necessary for living in a post-2008 Financial Crisis world. They arranged the books into four chapters (history, ideas, people, planet) that each have 13 sections.

The trouble is that they — like Kate Raworth and Ha-Joon Chang (both appear in the acknowledgements) — are too quick to condemn on shallow or biased understanding of economic ideas and the history of economic thought. These weaknesses in comprehension, which they might portray as “cutting through” or “David vs Goliath”, mean that readers are less likely to become “instant experts” and more likely to come across as shallow and opinionated. That’s a pity, as the book’s aim and structure are laudable. Its execution, alas, is flawed.

Some issues I ran across:

…indeed, I can open the book on nearly every page and find errors and bias that don’t just mis-state what economists say and teach, but also deceive any reader from understanding economics. This book is more of a car crash than a crash course.

Just to put this into context, consider how they distort Adam Smith’s  “invisible hand.” First, they claim he introduced the idea in his 1776 Wealth of Nations (WoN), when he actually introduced it in his 1759 Theory of Moral Sentiments (ToMS). I have read both books, but anyone on the internet could discover these facts within 2 minutes. Second, they brutalise a quote from ToMS (my strikeout shows what they omitted), which they claim came from WoN:

The rich are led by an invisible hand and thus without intending it, without knowing it, advance the interest of the society

So, they misquote Smith to fit their ideology: claiming Smith thought  “nothing should obstruct the pursuit of self interest because it would prevent markets from working efficiently” [p 54] when he wrote an entire book (ToMS) about constraining self-interest. It also seems they did not even read Smith’s update on the idea in WoN:

As every individual, therefore, endeavours as much as he can both to employ his capital in the support of domestic industry, and so to direct that industry that its produce may be of the greatest value; every individual necessarily labours to render the annual revenue of the society as great as he can. He generally, indeed, neither intends to promote the public interest, nor knows how much he is promoting it. By preferring the support of domestic to that of foreign industry, he intends only his own security; and by directing that industry in such a manner as its produce may be of the greatest value, he intends only his own gain, and he is in this, as in many other cases, led by an invisible hand to promote an end which was no part of his intention. Nor is it always the worse for the society that it was no part of it. By pursuing his own interest he frequently promotes that of the society more effectually than when he really intends to promote it.

Note that the main idea (selfish acts help all) has not changed, but Smith has applied it to every individual.

I could go on, but I’m already tired of the fail in this book.

My one-handed conclusion, which should please both Mr. Wilson and Mr. Truman, is that this book is a waste of time. I won’t be able to lend it to my students as I’ve tossed it in the bin. ONE STAR.

One thought on “Review: Economics, a Crash Course”