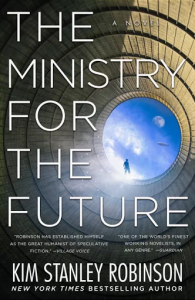 This book by Kim Stanley Robinson (KSR) came out in late 2020. It’s a CliFi story about The Ministry FOR the Future, a (fictional) UN agency based in Switzerland with a mission to protect future generations from our current (climate-changing) selves.

The book is long (577 pages; my page numbers are from the digital version), with interwoven stories that sometimes peter out and sometimes take up more space than you’d expect. It’s a bit operatic.

KSR has a deep understanding of the political and economic forces driving climate chaos (CC), various mitigation and adaptation options, and the science of what is happening to ecosystems and humans as the chaos intensifies.

The book begins with an (entirely believable) heat wave in India that kills millions. NB: The difference between India and the Pacific Northwest (recently hit by a heat wave that killed hundreds) is the same in the book as now: wealth. CC will kill far more poor than rich, on a per-capita basis.

The undercurrent in the book is a struggle with adapting to worsening CC and attempts by the MftF, as well as many other actors, violent and diplomatic alike, to mitigate worse damages. I found the adaptation struggles and CC damages to be entirely believable. [SPOILER ALERT] I found the mitigation success to be a bit too fast and easy, although KSR at least builds a reasonable excuse (a carbon coin) for 200 or so nations to cooperate in reforming their economies, cities, transportation and infrastructure.

The central stories in the book involve Mary, who leads the MftF, and they focus on her work in the Ministry, building solutions with outsiders, and her relation with Frank, a near victim of the heat wave who travels to Switzerland to shock Mary and others into taking action. It’s difficult to combine fiction with science, but I think KSR does a good job (not that I could even get within miles of his writing!), putting this book firmly into my CliFi canon. (You know that I edited two books of short CliFi stories, right? Go download them; they’re free.)

So let me get to my usual set of bullet-point highlights and comments:

My one-handed conclusion is that anyone interested in their future, the science and political-economy of climate chaos, and good writing should read this book. It’s long, but always interesting. FIVE STARS.

One thought on “Review: The Ministry for the Future”