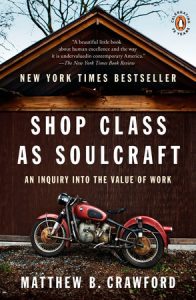 H/T to TM for recommendung this 2009 book (subtitle an inquiry into the value of work) by Matthew B. Crawford, as it’s so good that I have been recommending to many people — whether they have rough or soft hands.

The hook: Crawford got a PhD in political philosophy (U Chicago). After getting a job at a think tank, he decided that work was neither tangible nor useful. So he bought a motorcycle repair shop.

So this book is about two things: debunking the myth that manual labor doesn’t require brains, skill & judgement, and focussing readers on the existential question of “why am I doing this?”

It came to me at an opportune time, as I have been putting more of my time into hobbies like woodworking, boats (1 part maintenance for each part boating), and renovating (e.g., painting ceilings, demolishing a chimney, or installing a new floor).

Top line: The book is short (160 pp), well written and thoughtful. I’m including many quotes because Crawford brings so much concise wisdom to the page. They are merely the appetiser for the main course: reading this book!

Many Quotes & some notes [emph added]

My one-handed conclusion is that everyone should work on difficult projects (as a hobby if that’s not your job), as a means of learning humility from failure and appreciation of a job well done (or poorly done). FIVE STARS.