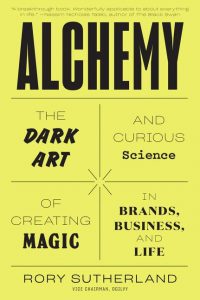 I bought this book (subtitle The Dark Art and Curious Science of Creating Magic in Brands, Business, and Life) immediately after hearing Rory Sutherland debate the relevance of economics to normal people’s behavior on EconTalk.

It was well worth buying, as I made more than 150 notes and highlights while I was reading. (Speaking of notes, Sutherland loves footnotes, and they are funny, so I recommend buying the physical rather than the digital version of the book soo you can enjoy the footnotes.)

Sutherland’s main points are that (1) people are not the hyper-rational calculating machines that some economic models suggest and (2), marketing people  are well aware of the many “irrational” ways people make decisions — and they use that knowledge to sell stuff. Claim (1) is not controversial among economists, but claim (2) is, as that implies a “free lunch” that some people can use and others (including economists) cannot.

Such a situation is no surprise for anyone observing the continued (and annoying) existence of advertisements and marketing, but it’s a bit of a surprise to anyone assuming that humans dislike being fooled and manipulated. That said, the entire field of “behavioural economics” (read my review of Thinking Fast and Slow) more or less tests and measures the degree to which we are reliably manipulated right in front of our eyes!

With that preamble, I’ll now give my (typical) series of notes and quotes (“loc” refers to location in my Kindle copy of the book). Oh, and I am curious to know which of these notes/quotes you find to be the most useful/insightful. Please leave a comment 😇

My one-handed conclusion is that this book is worth your time, whether you’re an economist or normal person, as we need to better understand our  “irrational but powerful” desires and impulses, lest someone else take advantage of our misunderstanding them. FIVE STARS.