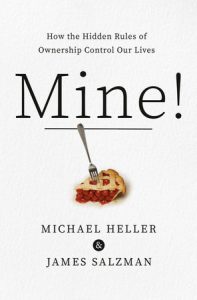 I heard about this book (subtitle “how the hidden rules of ownership change our lives”) via this Econtalk podcast and “acquired” a copy.

The authors (Heller and Salzman, or H&S) turn what looks like a simple topic — ownership (or property rights) — into an engaging and though-provoking essay on the vague borders between what’s mine, yours and ours. (I reviewed Salzman’s 2012 Drinking Water: A History.)

Their main points are that (1) ownership is not always clear and (2) some actors try to leverage this vagueness into profits and/or advantage, i.e., “as valued resources becomes scarcer, people compete more intensely to impose their preferred ownership story, and entrepreneurs find ways to profit” [p 5]. Theme (1) is important in most of the work I do on the commons (where ownership is either unclear or impossible to assert), so I found their examples — coming from both economic and legal perspectives — to be very interesting.

Here are some notes on the book’s contents:

Although the book is a bit heavy on examples, my one-handed conclusion is that anyone interested in prosperity, sustainability and the rules underlying our cooperation and happiness (as well as racism, inequality and corruption) should read this book. FIVE STARS.