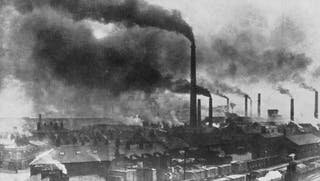 Nineteenth century lithographs show the beginning of urban pollution in London. The coal driving the industrial revolution was wrapping the British capital in a thick smog. Since then, the number of cities with polluted air has increased on all continents. Urban areas suffer pollution from their concentration of people and factories.

Air pollution harms quality of life and health. Reducing pollution and its effects have been the focus of urban policies almost everywhere around the world, especially in China, whose major cities are the ones that suffered the most from this problem on a world scale. Nonetheless, reducing the levels of pollution emitted by factories has not solved the problem. Although modern factories are much cleaner than Victorian-era ones, zero-polluting cities are today impossible. Residual pollution will continue to affect the health of inhabitants, and this will continue to cause social and economic losses (Brunekreef and Holgate, 2002).

As Adedokun (2013) argued, trees cannot “solve” this problem since they are too few to sequester carbon emissions or counteract pollution. Cities and industrial areas have abundant concrete and asphalt, so these surfaces need to sequester carbon.

What if the concrete of our buildings and roads could sequester the pollution from nearby cars? What if buildings and factories could trap pollution more effectively than trees?

Such “carbonation” could — according to Haselbach and Thomle (2014) — mean that concrete exposed to pollution could sequester its carbon. But that sequestration needs to be compared to the environmental and economical costs of producing such carbon-sequestrating concrete in the first place, as the net impact could be negative for the environment, especially if “green cement” is used as an excuse to build more (Dwarakanath Ravikumar, 2021). That said, Andersson (2019) claims there is a potential to modify existing concrete buildings so they can sequester carbon. Clearly, there are still questions to resolve.

Bottom-line: The challenge posed by climate change requires us to find all possible ways to save ourselves. Carbon-sequestrating concrete has potential, but its viability remains uncertain.

4 thoughts on “Can concrete be better than trees?”