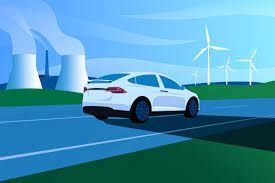 Policymakers and pro-climate groups want to address the climate crisis by replacing cars with internal combustion engines (ICEs) with electric vehicles (EVs). But can EVs be a true substitute for ICEs? Perhaps not. To fully grasp the potential benefits of EVs, it is important to know the extent to which EV owners actually end up driving them. This presents a challenge. Because EVs are primarily charged within homes, the existing charging data has been limited.

A 2020 study from the University of California – Davis [pdf] estimated that Californians drive their battery EVs 11,35o miles per year on average. These past analyses, however, were based on surveys and small sample sizes. Surveys are often inaccurate due to response bias, meaning that people have a tendency to respond to surveys with answers they believe to be more socially acceptable than true. This can be a subconscious phenomenon which skews the data. Small sample sizes can similarly affect data because a small subgroup may be unrepresentative of overall EV owners.

This year, another study at multiple universities including the University of California – Davis [pdf], using a much larger sample and direct measurements, indicates that EVs are being driven significantly fewer miles than their ICE counterparts. The study utilizes billions of California electricity meter measurements merged with address-level data about EV registrations in order to estimate the change in energy usage from EV charging. The result is an unexpectedly low change — a 2.9 kWh daily increase in electricity usage — signaling lower EV usage than previously thought. After adjusting for charging outside of the home, those results translate into battery EVs being driven only 6,700 miles per year. Data from the California Department of Public Health indicates that Californians as a whole typically drive around 9,000 miles annually.

The explanation for the low usage of EVs is not exactly clear, but the paper [pdf] cites a few possibilities. One possible explanation is that EVs might provide lower marginal utility per mile traveled when compared to ICE miles. The lower utility could stem from shorter distance range of EVs or insufficient charging networks. Another reason for less than expected charging could be that most EVs are owned by multiple-vehicle households. This would mean that EVs are a complement to ICEs instead of a substitute, and households who buy an EVschoose to drive their ICE more often than their EV. The last explanation I will touch on is that low charging rates could be a reflection of high electricity prices in California.

No matter the explanation, this information has important implications for future climate policy. The results indicate that policymakers should maybe reconsider making drastic commitments to EV technology in order to reach their decarbonization goals because it may not be as effective as it seems.

Bottom Line: EVs might not replace conventional gas-powered vehicles, so  policymakers might need to pump the brakes on EV promotion until they have better information and instead focus on other ways to  decarbonize society.

3 thoughts on “SCANDAL: EVs have a dirty little secret!”