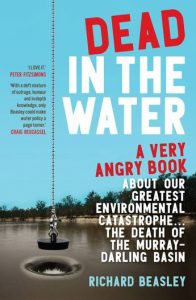 This book, with the *subtitle “a very angry book about our greatest environmental catastrophe. . . the death of the Murray-Darling Basin” is not subtle.

Richard Beasley is smart (his critiques are top notch), angry (rightfully so, given the incompetence on display), and well-founded (he makes legal briefs digestible) in his critiques of the Australian government’s catastrophic (fucking obvious) and monumental (total failure to deliver) implementation of the Water Act of 2007 and (dependent) Basin Plan of 2012.

tl;dr: You should get this book (which seems to have limited international distribution outside Australia) if (1) you want to learn about an environmental policy failure driven by the greed of a few politicians and short-term thinking of the water-consuming industries (90% farmers and 10% water “optimizers”), (2) you are willing to wade through endless examples — documented — of failure and obfuscation, and (3) you can’t wait to laugh at Beasley’s quips, footnotes and [redacted].

It’s a long book, but never boring, and definitely infuriating (*hence the subtitle).

This book’s theme and the recklessness of its protagonists matches — in terms of frequencies of wtf? and magnitudes of delusion — the water situation  in California (which I know well), as well as maybe 80 other countries, from Saudi Arabia to China to India to Spain, Chile and Mexico. (Just fill in your choice, and there’s bound to be a case where environmental protection — the type that keeps us alive — is discarded in favor of “cheaper” farming or urban sprawl.)

So, yeah, anyone can learn from this, in terms of recognizing all the games, lies and shenanigans that politicians will pursue to meet “co-equal goals” of, for example, delivering both “yes” and “no”.

I’ve just scrolled through my 30+ notes and highlights on the e-book I have, and I can’t really see the point of copying or commenting on the text. The  book is best seen as a piece — an angry, well-documented denouncement of feckless, relentless, not-accidental corruption.

The fact is, and has always been, that there’s an impact of taking water from the environment. In many cases, that can be “sustainable” as ecosystems can adapt. And food is surely useful. But there are then so many greedy cases in which diversions kill ecosystems for green lawns or cheap cotton, when the trade-off has gone from “socially responsible” to “let’s turn the nation’s water into our paychecks.” That’s a fail. It’s common, and it happens in places as civilized as Australia.

My one handed recommendation: Anyone involved or interested in the management of bulk water for agriculture, the environment or society (all of you, right?) should read this book. FIVE STARS.