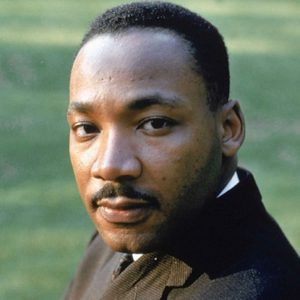 Nicole Hannah Jones used excerpts from MLK’s speech to a hostile audience without telling them the words were King’s. The transcript below is worth reading, to remember what he (and others) fought for, and to notice how there’s still a ways to go…

I was invited to give an MLK speech today and a small number of members of the group hosting me wrote and then leaked emails opposing my giving this speech, as it dishonored Dr. King for me to do so. They called me a “discredited activist” “unworthy of such association with King”

So, I scrapped my original speech and spent the entire first half of it reading excerpts from a bunch of Dr. King’s speeches, but without telling anyone that I was doing so, leading the audience to think King’s words were mine. And, whew, chile, it was AMAZING.

Here is some of it:

Wherever you see Black in caps, it’s bc I subbed out Negro to not give it away.

“For more than 200 years Africa was raped and plundered, a native kingdom disorganized, the people and rulers demoralized and throughout slavery the BLACK slaves were treated in a very inhuman form…”

“The problems of racial injustice and economic injustice cannot be solved without a radical redistribution of political and economic power. A nation that continues year after year to spend more $ on military defense than on programs of social uplift is approaching spiritual death

“The crowning achievement in hypocrisy must go to those staunch Republicans and Democrats of the Midwest and West who were given land by our government when they came here as immigrants from Europe. They were given education through the land grant colleges…”

“These are the same people that now say to black people, whose ancestors were brought to this country in chains and who were emancipated in 1863 without being given land to cultivate or bread to eat; that they must pull themselves up by their own bootstraps…”

“We know full well that racism is still that hound of hell which dogs the tracks of our civilization.”

“The fact is, there has never been a single, solid, determined commitment on the part of the vast majority of white Americans to genuine equality for Black people.”

“The step backwards has a new name today, it is called the white backlash, but the white backlash is nothing new. It is the surfacing of old prejudices, hostilities and ambivalences that have always been there…”

“The white backlash of today is rooted in the same problem that has characterized America ever since the black man landed in chains on the shores of this nation.”

“Whites, it must frankly be said, are not putting in a similar mass effort to reeducate themselves out of their racial ignorance… with each modest advance the white population promptly raises the argument that BLACK AMERICANS HAVE come far enough.”

“…for the good of America, it is necessary to refute the idea that the dominant ideology in our country, even today, is freedom and equality and that racism is just an occasional departure from the norm on the part of a few bigoted extremists.”

“If America does not respond creatively to the challenge to banish racism, some future historian will have to say, that a great civilization died because it lacked the soul and commitment to make justice a reality for all men.”

“Why do white people seem to find it so difficult to understand that the Black people are sick and tired of having reluctantly parceled out to THEM those rights and privileges which all others receive upon birth or entry in America?”

“I never cease to wonder at the amazing presumption of much of white society, assuming that they have the right to bargain with the BLACK for their freedom…”

Oh, the uncomfortable silence as I read Dr. King’s words at a commemoration of Dr. King’s life when people had no idea that these were his words. When I revealed that everything I said to that point was taken from his speeches between ’56 and 67… Can you say SHOOK!

Then I read all the names that white Americans called King: charlatan, demagogue, communist, traitor — and brought out the polling showing more than three-quarters of Americans opposed King at his death while 94 percent approve of him now.

I left them with this: People who oppose today what he stood for back then do not get to be the arbiters of his legacy. The real Dr. King cannot be commodified, homogenized, and white-washed and whatever side you stand on TODAY is the side you would have been back then.

In fact, most white Americans in 1963 opposed the March on Washington where Dr. King gave the “I Have A Dream Speech” with that one line that people oppose to anti-racism like to trot out against those working for racial justice.

When the speech was over, Father Pfleger, who had been been cheering me on from the crowd, whispered in my ear: That’s what you call the “You Gone Learn Today” speech and I 💀. Because, yeah.

Dr. King was a radical critic of racism, capitalism and militarism. He didn’t die. He was assassinated. And many, including Regan, fought the national holiday we’re not commemorating. If you haven’t read, in entirety, his speeches, you’ve been miseducated & I hope that you will.

One-handed conclusion: MLK was — and is — right.