On April 1st 2022, a Memorandum of Understanding was signed between the President of Indonesia, Joko Widodo, and the Prime Minister of Malaysia, Ismail Sabri Yaakob, committing to improving the safety and protection of Indonesian migrant workers in Malaysia. This agreement came about after several reports and complaints were filed on the abuse of migrant workers. At the same time, Malaysia is experiencing a shortage in foreign labour due to government measures to protect locals during the Covid-19 pandemic.

How can we make sense of the contradictions facing migrant workers in Malaysia? How do Malaysia’s migration policies affect labor?

This is hardly surprising, given that migrant workers have always been an integral part of Malaysia’s economic development model, especially during its transition from lower to upper-middle income. During the colonial era, Chinese immigrants worked in the tin-mining industry, while indentured Indians from British India worked in agriculture and transport. These early migrant workers contributed directly to the development of industries, infrastructure and as a result, the economy of Malaya, and later assimilated themselves to become Malaysians. 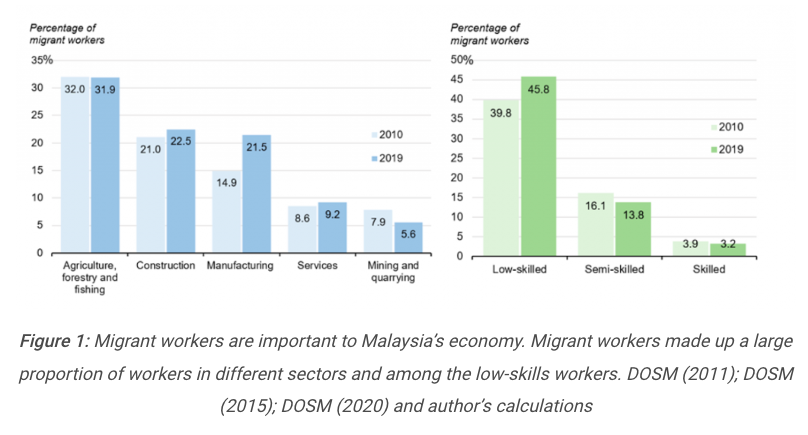 Migrant workers are subjected to abuse, discrimination, poor living conditions and other human rights violations. Many are forced to work off their debts resulting from trafficking, face risk of sudden termination, arrest or detention. Since they are also assimilating, it is important to help migrants integrate in harmony with the local population.

Bottom Line: In Malaysia, migrant workers are vital for economic development but their treatment is detrimental for social development. My research seeks to investigate active labour migration policies as a way of understanding this co-existing relationship between economic and social development in Malaysia.