This path to join the market-led Pacific Alliance is a new direction for Ecuador, signaling political and economic change on the horizon. Previously, the leftist president of Ecuador, Correa, was adamantly opposed to joining the Alliance. Hence, President Correa justified in 2013 that Ecuador would be a member of ALBA, which is a trade alliance by the socialist Latin American regions. These two opposing trading blocs reflect the different political ideologies in Latin America as there are “two opposing visions of the world: neoliberalism and free trade versus those that believe in socialism and the guarantee of rights; those that believe not in free trade zones but zones free of hunger and free of poverty”. 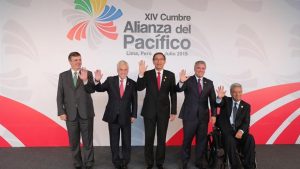 However, after Correa’s presidency ended in 2017, President Moreno swiftly reformed the trade orientation to no longer be a member of ALBA and take steps to initially becoming an associate member of the Pacific Alliance, the more neoclassical market-driven regional bloc of the Latin America Region. The future step to Ecuador’s full membership in the Pacific Alliance is to have a bilateral free-trade agreement with each member state, of which the final negotiations with Mexico will be closing in the next months. Due to the current pressure for post-pandemic economic recovery and movement towards sustainable development, the time and conditions are currently ripe for Ecuador to become a member of the Pacific Alliance.

Joining this young but strong regional integration bloc offers great promise for a small Pacific country like Ecuador to further its economic growth and development. First, becoming a full member and having access to open markets is advantageous to Ecuador’s value chains as 1,700 Ecuadorian companies export goods like oil, bananas, canned fish, etc. to the Pacific Alliance, lowering the cost of production. Second, becoming a member of the Pacific Alliance would add to Ecuador’s international competitiveness because it would allow them to achieve economies of scale and productive efficiency for export products as they enter a larger market as a small country. Third, the Pacific Alliance promises growth prospects for Ecuador as the bloc is expected to be the fourth-largest contributor fourth-largest contributor to world growth in the coming five years.

Bottom-line: Ecuador’s membership in the Pacific Alliance would signal a change in its development path. Previously Ecuador’s economic development was dominated by Leftist and protectionist policies, but today, policy demonstrates a desire for deep regional integration, productive efficiency, and trade openness.