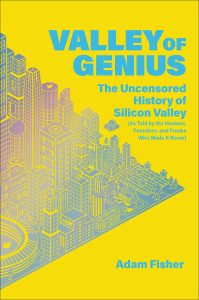 I bought this book for two reasons. First, I went to high school with its author Adam Fisher. Second, I am always interested in learning more about the history of innovation, entrepreneurship and start-ups.

I haven’t talked to Adam in 30 years, so my relation with him was more relevant in alerting me to the book’s existence than it was in my decision to buy it. That decision was based on Adam’s unusual method of telling the “uncensored history” through a “mashup” of first person perspectives on various Silicon Valley companies and trends. (Here’s the he-said-she-said excerpt on Facebook.)

The book’s 28 chapters are arranged into “waves” that struck Silicon Valley, moving from hardware (70s and 80s), to the internet (90s) and then to social media (00s). These topics overlap and intermingle, but the groupings provide structure in a history book with nearly as many characters as the cast of War and Peace.

I found this book to be an exciting read due to its broad coverage of most of the major players in the Valley over the past 50 years and its technique of telling stories using the fresh perspectives of actual participants. In combination, I learned a lot more about the evolving culture in my “home town” and how that culture changed itself before it changed the world.

Your basic values are essentially the architecture of the project. Why does it exist? And in Silicon Valley there are two really common sets of values. There are what I call financial values, where the main thing is to make a bunch of money. That’s not a really good spiritual reason to be working on a project, although it’s completely valid. Then there are technical values that dominate lots of places where people care about using the best technique—doing things right. Sometimes that translates to ability or to performance, but it’s really a technical way of looking at things. But then there is a third set of values that are much less common: and they are the values essentially of the art world or the artist. And artistic values are when you want to create something new under the sun. If you want to contribute to art, your technique isn’t what matters. What matters is originality. It’s an emotional value.

This quote captures the main tension that’s explored in the book (and prevalent in Silicon Valley), i.e., the tensions between free and corporate, hippy and troll, community and individual, art and engineering, acid rainbows and beery white dudes.

Thus, the Valley’s inhabitants face a struggle between creating “insanely great” improvements in our lives and sacrificing us to their greed, ego and power. The book is full of warnings and wisdom from this struggle:

There was kind of a social policy: “You own your own words” was mostly about people had to get permission if they were going to quote you, but it was also about taking responsibility for your words.

The tension between taking responsibility (and being held accountable) for your actions and denying that responsibility in a quasi-libertarian excuse to screw over others also plays an important role in my research and teaching. In many instances, water policy affects the social distribution of costs and benefits. In many instances, those policies are flawed because some group is able to take benefits for themselves at a cost to others. That’s the tension between a farmer’s consumption of groundwater and the community’s security. That’s the tension between Facebook’s promise to connect the world, and its business of profiting from manipulating those connections.

I highly recommend (5-stars) this book to anyone who wants to learn more about the humans who built a Valley of Genius. Is the genius good or evil? The answer depends on who takes responsibility and who is held accountable.

To read all my reviews, go here.

One thought on “Review: Valley of Genius”