While it is impossible to determine one specific cause of the outbreak of the Lebanese Civil War (1975-1990), it cannot be denied that the religious division that is so deeply ingrained into Lebanese society played a massive role. This is evidenced by the fact that each party involved in the multi-faceted war was determined by religion. For example, the Druze religious sect’s militia was the the Progressive Socialist Party, and the Muslim Shia religious sect’s militia was the Amal Movement (Abouzeid, 2021).

After 15 years of conflict, bloodshed, and death, the Taif Agreement was introduced to Lebanon in hopes to put an end to the war. Interestingly, one of the main conditions of the agreement was that once the war would end, the government was to be restructured according to a sectarian regime (Nagle & Clancy, 2019). This was to be done using religious quotas for parliament seats — e.g., 34 seats for Christian Maronites and 27 seats for Muslim Sunnis (Rosiny, 2015). The thought process behind this was that no single religious group would be able to gain enough power to have an unfair political advantage over the others.

The implementation of a sectarian regime was also done in foolish hopes that somehow this would phase out religious division and reduce hostility and animosity between the sects; it did not. In fact, it did the complete opposite. One particularly interesting piece of evidence that corroborates this is how the Taif Agreement manifested a physical divide among the religious sects which severely reinforced the societal divide. To elaborate, after the Taif Agreement was signed, the strategy that was implemented in order to disarm all militias in the country physically solidified divisions among the faiths, erasing any hope of creating a socially cohesive society.

The strategy in question dictated that the Druze Progressive Socialist Party would retreat to the Chouf mountains, the Shia Amal Movement would withdraw to the eastern Bekaa, and the Maronite Lebanese Forces would go north to the Kesrouan range. The figure below depicts the current distribution of Lebanon’s main religious groups. 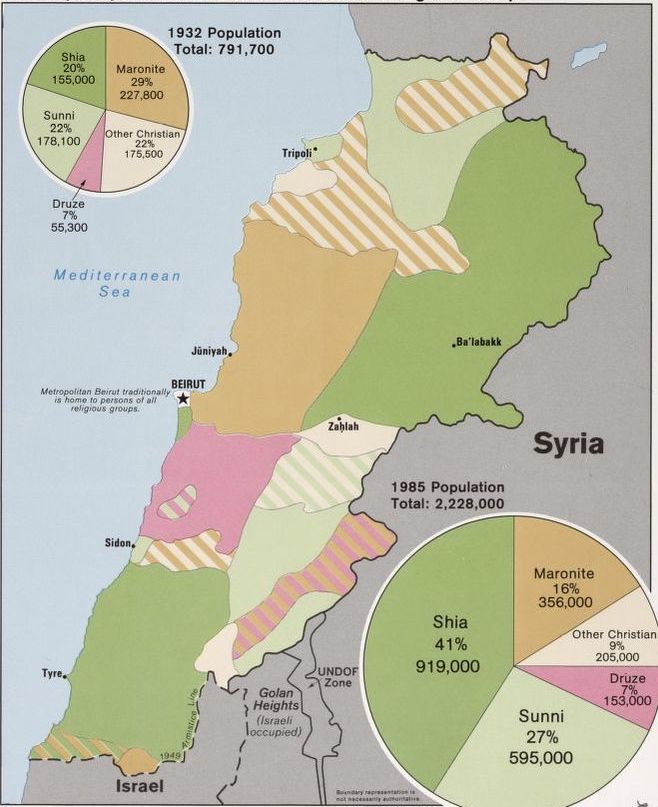 One can easily see that the religious groups remained in their designated areas, resulting in societal divisions that remain to this day. The Taif Agreement failed before it was even fully implemented.

Bottom Line: The Taif Agreement aimed to end the civil war and remove  religious divisions amongst the population, but it failed miserably by physically embedding those divisions into Lebanon’s map.