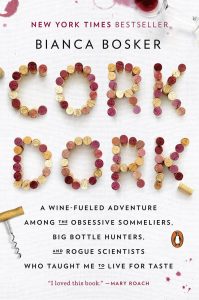 I can’t remember who recommend this book to me, but I am glad they did. It is about wine, and the weirdnesses we attach to wine, sometimes for good reasons, but often not. It’s a good companion to a movie like Sideways for those people who have a tendency to put their noses too deep into their glasses.

Bianca Bosker sets out with a huge ambition (to become certified as a sommelier, aka “cork dork”), and she learns a lot on the way from those kind enough to give their time (or too slow to escape her persistence). This book is her record of that process of going from “red or white?” to someone able to recognize the smell of a particular grape, vintage AND region.

I won’t go into step-by-step details, except to say that the process gives some excellent structure to writing that balances between funny failure and caustic critique of the many steps between the grape and your glass.

The good news is that most of us can drink tasty wine for $30 per bottle (these are restaurant prices, so maybe $10 from the store?). The bad news is that anyone who wants “something different” — and especially if they want something that’s more handmade (a thousand cases per year) than industrial (a thousand cases per day) is gonna be paying $100 per bottle ($30 in store) and up, until you get to showoff bottles ($500 and up) that are not really worth the extra Benjamins.

Along the way, I made some notes:

This is an entertaining fun book. If you like wine, then read it. FIVE STARS.