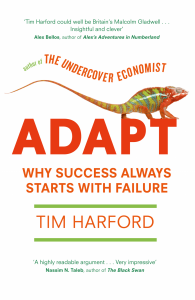 I found this 2011 book by Tim Harford in the local “book exchange” on teh corner and grabbed it, since I’ve read his Undercover Economist and listened to his fun “Cautionary Tales” podcast.

I was glad I did.

Harford’s books fall into the space between Malcolm Gladwell and Nassim Taleb, as he’s both an economist and journalist, and that’s where I like to hang out. (Fun fact, this book came out before Taleb’s 2012 Anti-fragile, which covers, AFAIK, the same topic.)

This book’s premise is that we can hardly hope to get it right the first time, especially when exploring new ideas or facing new challenges, so he says we should focus on adaptation, which is useful for dealing with climate change but also to any other change.

The way to do this is summarized as the Palchinsky Principles*:

You can stop reading here, as that’s “the lesson,” but I will (as usual) add a bunch of notes (only a fraction of the notes I made while reading) that give more context to those steps.

My one-handed conclusion is that we can all benefit from Palchinsky’s Principles — and reading this book, especially as we enter an era that (in my evolving opinion) will not look like the 1930s or 1970s, but the 2020s, and it’s going to full of chaos and the need to adapt. FIVE STARS.