“Peru is a beggar seated in a golden bench.” This famous phrase by Italian scientist Antonio Raimondi is especially relevant to describe the socio-economic reality of the Peruvian mining industry. While it is perceived to be thriving in terms of contribution to GDP and hence output, there is a different story to be told in terms of development for neighbouring mining communities which are responsible for natural resource extraction. Most surprisingly, it is not a new story, but one that has persisted over the centuries.

Probably unbeknownst to the reader, Peru is the second largest exporter in the world of copper, silver and zinc and the fourth largest exporter of gold in the world. The industry accounted for 62% of total exports in 2017, constituted 10% of GDP and 5% of employment generation in the same year.

Even though mining projects by 2021 are valued at almost $70 billion dollars, it is mostly benefitting large multinational companies and local giants. On the other hand, the miners, responsible for the manual labour, will probably not reap the most gains. Today, 50% of the population in these mining communities is living under the poverty line, 15% remain illiterate and overall, the communities count with a disheartening human development score of less than 0.5, while the country counts with an average of 0.75 out of 1.

History seems to repeat itself, as these regions continue to be the poorest in the country, 500 years after the institutionalization of the Spanish mita, used to colonize the native population. Miners, similar to other poor communities in Peru, face a significant obstacle to development: they remain at a historical disadvantage in obtaining their rights against a persistent pattern of extractive institutions and exploitation. In the present, miners stand powerless against giant corporations which do not have it in their agenda to contribute to the progress of these communities but rather to generate enormous profits. 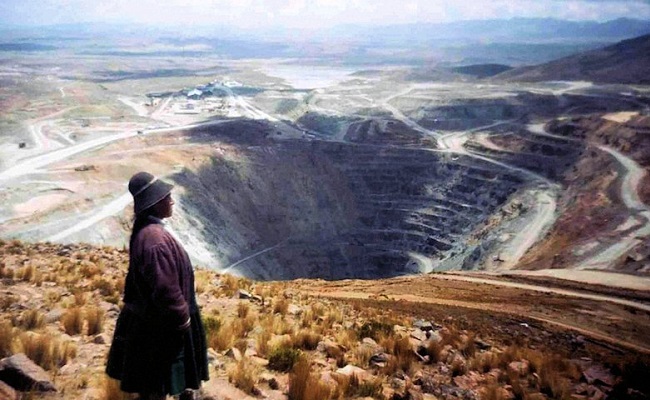 Although the Ministry of Mines and Energy (MINEM) has predicted to formalize almost 10,000 miners this year, informal miners constitute at least 750,000 of the mining community, while those directly formally employed lag behind at 190,000. This means that at least 75% of all miners in Peru are waiting for their rights to be recognized by the state. If the efforts by MINEM are successful, formalized miners will have rights to extract resources over a certain area through concessions, which most miners are unable to do so at the moment.

Informality, alongside environmental concerns and poor living conditions, has sparked conflicts in mining communities and deterred potential investment. It is estimated that $12 billion dollars in investment could go forward if conflicts in the South of the country would be resolved. Mining conflicts are most prevalent in this region given that this is where most mining activity takes place. These conflicts are mostly caused by environmental concerns, dissatisfaction of the miners with the role of the State and direct confrontations with major enterprises. While these are mostly protests, some have scaled up to pose a risk to human life, most notably in Tia Maria and Conga.

While the government is making significant strides to try to overcome conflict and informality, there remains the question whether the reforms will achieve meaningful progress and institutional change.

In order to address this issue, the government is currently working on the establishment of three main types of funds. This includes a macroeconomic stabiliser “Fund of Fiscal Stabilization“, eight regional social funds, and the most recently set “Fund of Social Advancement”  set to begin its operations in 2019. While the latter two intend to contribute to the provision of basic public goods and services in mining communities – including water, sanitation, infrastructure and education – the former is a sovereign wealth fund intended as a risk stabilizer if a catastrophe were to happen in the economy. The Fund of Social Advancement seems to be the most promising, given that it intends to merge the efforts of the regional funds into a centralized mechanism, for which $15.1 million dollars have already been destined.

Nevertheless, a significant weakness of these funds is that, while they seem specialized in the provision of essential public goods, they do not intend to tackle the long-term challenge of breaking the barriers of path dependency. Essentially, a potential solution could be to centralize efforts into a macro-encompassing fund which guarantees security and the development of future generations. For instance, Peru could mimic the Norwegian Sovereign Wealth Fund model by guaranteeing that a significant share of the profits of natural resource extraction are destined to the sustainable development of the mining industry and the communities involved.

Bottom line: Even though the mining industry in Peru is perceived as thriving by dollar counts, there is a different story to be told in terms of the development of neighbouring mining communities to major projects.

2 thoughts on “Peru’s poverty of riches”