The collapse of the Soviet Union was followed by major economic transformations in the dawn of 1990s Russia. Rapid privatisation of the market and liberalization of economic policies gave rise to many private businesses. Since the collapse of SU left many soldiers, and Soviet team sportsmen unemployed, they came together to form racketeering groups specializing in exploiting the profits the private sector made. Extorting, or “appropriating someone’s property under threat of violence or damage to that subject’s prop­erty” (Volkov, Vadim. Violent Entrepreneurs : The Use of Force in the Making of Russian Capitalism, p.3) was their business model, and given the lack of rule of law, this model proved to be a major success. Since this period coincided with the gradual restoration of Russian central authority, structure of all formal institutions of Russia came came to be shaped by gangsters. Now, in such conditions, paying a bribe was a given, and an economy characterized with corruption started to grow and influence its neighbouring country: Ukraine.

Everything was up for grabs, and therefore ‘Aluminium Wars’ took off. Aluminium Wars were waged by gangsters for the influence on Russian Aluminium production. Violence soared, and those who came out as winners, formed into the network of oligarchs, who practiced huge control over Russian resources. Why these above-mentioned processes had a great impact on Ukrainian economics has an origin in a great political and economic proximity of the two countries. 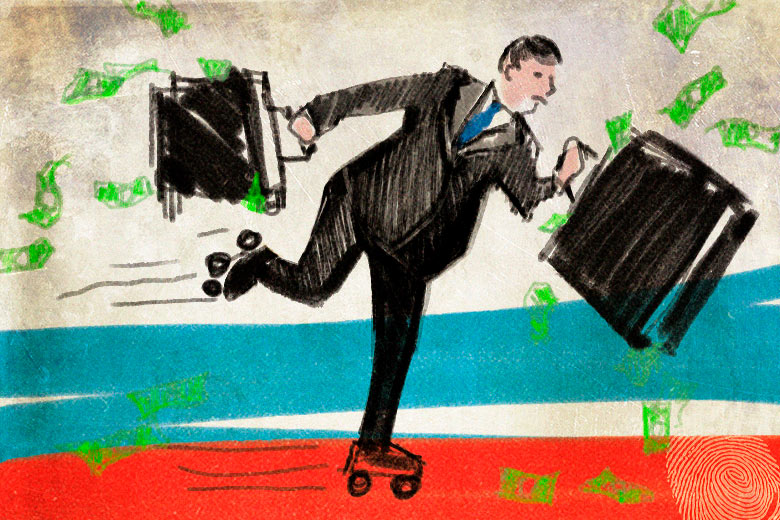 It has to be noted that Russian ethnic population in Ukraine is substantial, amounting to 17%; therefore, so is proportion of the pro-Russian electorate [pdf, p.5.] In addition to that, Ukraine is dependent on most of its oil and gas from Russia, and this dependency is exacerbated given Ukraine has special discounted prices for these resources [ibid, p.7]. Another indicator to the dependency of Ukraine on Russia is how over time, Russia has always been a significant market for Ukrainian exports. For instance, looking at Ukrainian exports of 1996, 38.7% of total exports is owed to Russia [ibid, p.8]. Lastly, Ukraine is, and was in the 90s, a major receiver of Russia FDI, that’s why in the resource sector “out of the six Ukrainian oil-refining plants (ORPs), four are owned by Russian companies.” [ibid, p.10].

Given the above mentioned, it is reasonable to conclude that the economic phenomenon present in Russia had a great potential of impacting that of Ukraine. Importantly, the clear link is to be made between the roaming banditry and Russian economics at first, before discussing its implications on Ukrainian economy.

The interconnectedness of gangsters and economics ran deep. Russian entrepreneurship was based on engaging in criminal activity such as extortion, bribery, and even murder – “During that time, murder was a depressingly common way of resolving business disputes.” Violent entrepreneurship soared with the increased availability of valuable natural resources. According to CNN, out of the Russian oil, gas, timber and aluminum industries, rose a small number of individuals, and among those small group of people, were not only Russian, but also Ukrainian individuals.

Bottom Line: Russia’s and Ukraine’s strong economic interconnectedness is essentially predisposed by their geographic and cultural proximity. Therefore, Ukrainian economics was greatly influenced by the violent entrepreneurship that took off in post-soviet Russia.

2 thoughts on “A visit from the Russian mafia”