Last summer, I spent a month in Ethiopia. My family and friends thought my travel plans were surprising, but upon arrival in Addis Ababa, I learned that I didn’t attract much attention from the Ethiopians. They are used to seeing Chinese faces like mine. The value of Chinese investment projects in Ethiopia reached an estimated 4 billion USD last year. China is Ethiopia’s largest trade partner in terms of  exports (16% of the total, worth 344 million USD) and imports (33% of the total, worth 2.65 billion USD). These numbers reflect two sets of policies.

First, Ethiopia wants to attract foreign investments by improving its investment and business climate. Favourable policies combined with a big domestic market and a strategic location in the Horn of Africa make Ethiopia attractive for foreign investors.

Second, China huge Belt and Road Initiative (BRI) means that trillions of dollars in infrastructure financing are flowing to developing countries. On the one hand, BRI can be seen as a massive development project, providing unprecedented economic growth. On the other, BRI might result in unsustainable debts to Chinese creditors [pdf] and lost sovereignty. These are the two main narratives around Chinese investment in Africa.

It is indisputable that foreign investments have brought economic growth to Ethiopia. It has the fastest growing economy in the region, but growth has not necessarily brought higher incomes or better living conditions for the poorest citizens of one of the poorest countries in the world

This relationship may resemble the picture of foreign investors swooping into African countries to plunder natural resources with the cooperation of local elites, but Ethiopia’s story seems different. For one, Ethiopia does not have fossil fuels or rare earth minerals. Its main export is coffee, and  Chinese investments are focused on infrastructure and manufacturing. Second, the crackdown on corruption under Prime Minister Abiy seems effective. Our usual suspects, the resource curse and corruption, are not the main perils facing high-growth Ethiopia.

So is it just a matter of time until economic growth ‘trickles down,’ or are  new industrial parks, power plants and railways only benefitting Chinese companies and employees? And what other adverse effects might there be? 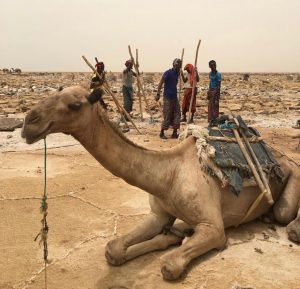 I was in the northern Afar region. Here, Afar men have worked for generations to extract blocks of salt in the sweltering desert heat. The salt is then transported by camels to the nearest market. The trek takes several days. When I was there, I saw many trucks marked with Chinese characters. New tarmac roads were just under construction, with the promise of more efficient transport. But infrastructure developments could have huge environmental impacts.

Will these developments destroy the environment and traditional ways of living, or bring prosperity? In the end, it is probably a combination of both.

3 thoughts on “Chinese investments in Ethiopia”